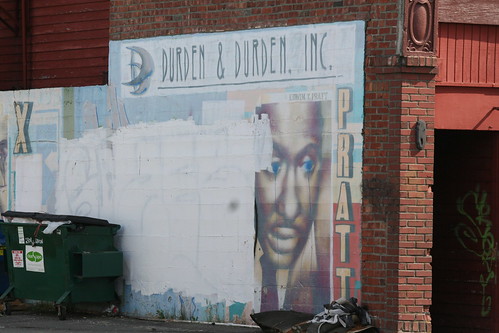 Back in the 90’s Derryl Durden hired two Garfield students to paint a mural on his building at 23rd & Union. Although their first graffiti-themed creation didn’t pass muster, he worked with them to create a work of art that paid tribute to three African American leaders: Madame CJ Walker, Malcom X, and Edwin Pratt.

The mural sat mostly unmolested for years. Durden says that even when taggers would hit the building, they’d leave the mural alone “as if they respected the artist that did it.” But it seems like a new generation of taggers have hit the streets in recent years, and they have no qualms about covering over another work of art.

When it does get hit, city rules require Durden to paint over it within 72 hours or face big fines. And the last time it happened he had to cover up a big chunk of the Pratt part of the mural.

Now the question is what to do next. Too many more coverups and there won’t be much more mural left. And nearby business owners have discussed painting over the whole thing.

So we’ll put out a call to all of the artists and art groups in the neighborhood. If anyone is interested in volunteering on a project to restore the mural, leave your comment below and we’ll put you in touch with Derryl.

It’s also come to our attention that some readers and nearby property owners aren’t familiar with the history of Edwin Pratt. He was a civil rights leader in Seattle and Executive Director of the Urban League and fought for years to end housing discrimination in the city. But just a month after his 39th birthday, he was shot dead by an unknown assailant in front of his Shoreline home. His murderer was never caught.

Pratt Park at 20th & Yesler is named in his honor.

0 thoughts on “Fate of Pratt mural up in the air due to tagging, graffiti”