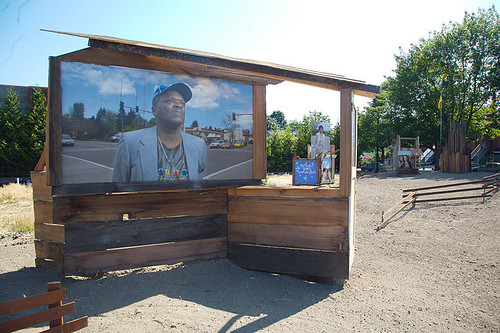 I want to let you know that the artists who created The Corner installation at 23rd  Avenue and East Union Street will be dismantling it today and tomorrow.

Recently, I was contacted by a police officer who asked me to remove the installation, saying that he’s received complaints from citizens about it. Jim Mueller, who owns the lot where the installation sits on 23rd and Union, asked that I comply with the officer and I am honoring Jim’s wishes.

If you’ve passed by 23rd and Union anytime in the past year you’ve no doubt seen Inye Wokoma’s larger-than-life photographs of neighbors looking out at you. But perhaps you wonder what the project is about.

The Corner is first and foremost a collaborative community storytelling project. Last summer, The Corner operated a ‘story hotline.’ Callers heard first-person stories about 23rd and Union, and were invited to respond to essential questions like “Whose corner is this?” and “What do you remember?”  875 callers left more than 200 messages on The Corner‘s hot line. Some of those stories aired on KUOW 94.9 Public Radio, and all are preserved on The Corner’s Web site.

The Corner created a forum – on the phone, on the street, and amongst its Facebook fans – where people with strongly divergent opinions felt welcome to express themselves. It was a platform for a dialogue about challenging issues of race and class. Images and audio collected by The Corner represent the diversity of the Central District, including an older African American woman who still attends church next door to her childhood home but can no longer afford to live in the neighborhood, a white resident who was mugged by a young black man and got involved in anti-racist work as a result, and a former Black Panther who fondly remembers a soul club on the corner.

I want to thank Jim Mueller for generously donating use of his property for the past year. The installation has remained up long beyond my original expectations. I’ve heard from countless people who say that the artwork has inspired them, led them to learn more about the Central District and its history, and have conversations with neighbors. I’m proud to say that we look forward to displaying the artwork – as well as the audio stories – at the Northwest African American Museum in 2011.

I know I will feel sad to see an empty lot where the artwork stood. Jim Mueller has been very receptive to displaying artwork on his property. I would encourage any neighborhood artists or groups who are capable of building and maintaining a large scale, temporary public artwork to consider pitching your idea to him. I’d be happy to offer advice.

Finally, thank you to everyone who worked on this project – from the artists and Web developers, volunteers who distributed postcards and posters, everyone who came to the public barbeque and brought food, and every person who told a story on the Corner’s hotline. I’m grateful beyond words.

To learn more about The Corner please visit our Web site http://23rdandunion.org
Here is an article about the ‘making of’ the Corner: http://transom.org/?p=3894

32 thoughts on “End of The Corner Exhibit”