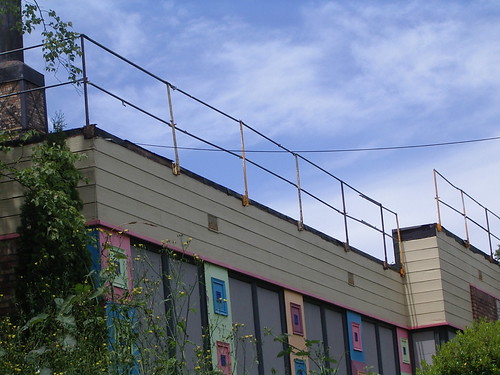 There’s a beehive of activity up on the roof of the boarded-up TT Minor school building, all part of a $663,661 contract to replace the roof on the building.

We called the school district to get the scoop, wondering whether the improvement was paid for or tied to the new lease on the property by the Hamlin Robinson School.

According to Tom Redman at Seattle Schools, the project is paid for by the district out of the Buildings, Technology and Academics Levy II that was approved by voters back in 2004. Tom says that the project is part of the district’s asset preservation program, and would have happened whether or not the school was leased, due to the need to keep the building from deteriorating into an unusable state.

As we reported last month, Hamlin Robinson will start classes in the building this fall, and they say that their task list to get it fixed up is limited to a bit of paint and cleaning. They should be glad to know that drippy ceilings won’t be something to worry about either.