Commuters crossing the intersection of 23rd Ave and E Cherry St this spring may have noticed a young woman waving to traffic while holding a sign for Cashmere’s Fashion Earrings -N- Thangz. The young woman’s name is Trina, and she’s an employee of Cashmere Lowery, the young entrepreneur who opened the shop of his namesake. 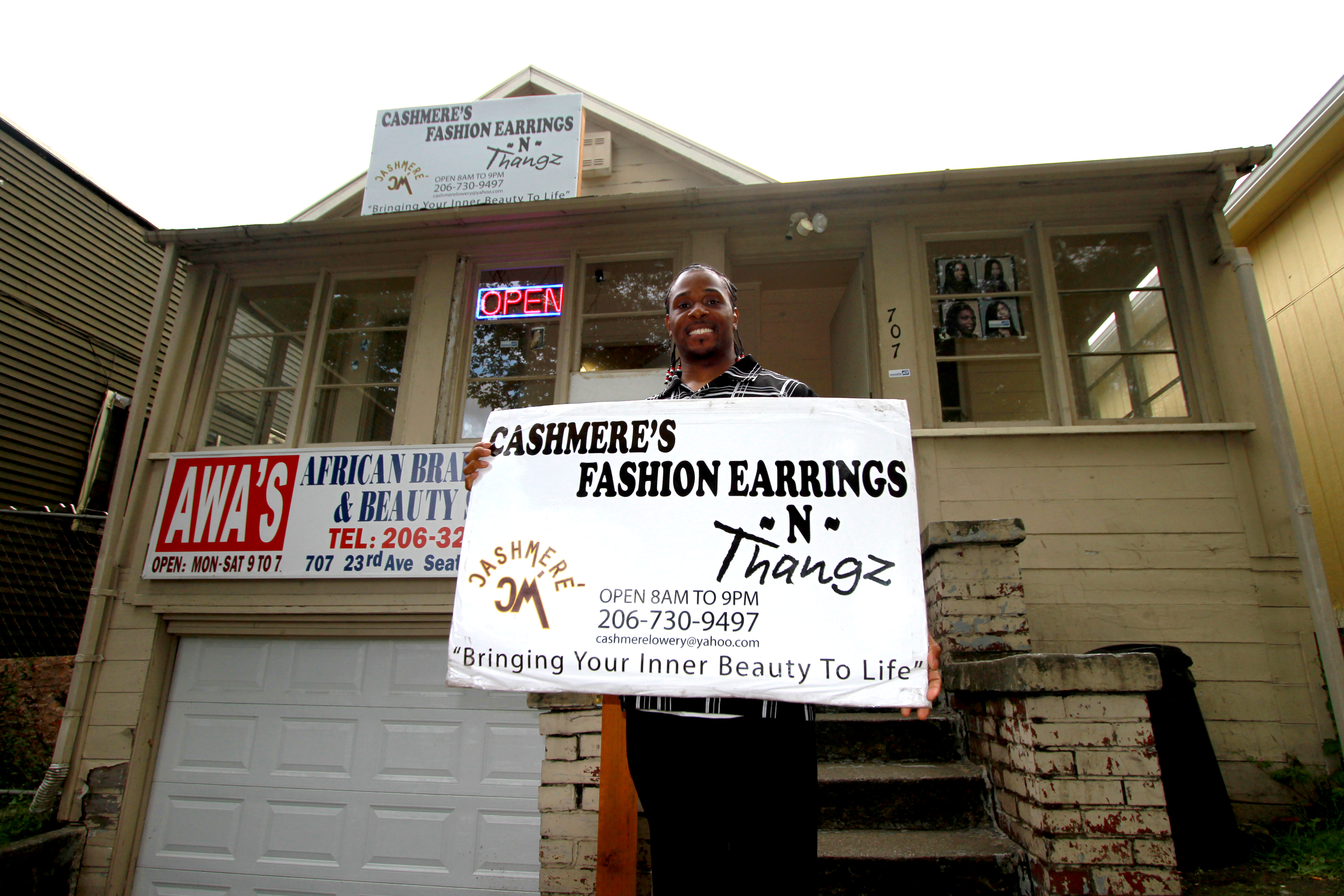 While Trina handles the guerrilla marketing, Cashmere is a busy entrepreneur. This past weekend he graduated from the Seattle Vocational Institute, a program offered by Seattle Central Community College, where he focused in cosmetology. Fast on the heels of his graduation, he enrolled in SCCC for an Associate of Arts in Business, which he will begin this summer.  In the meantime, Cashmere will work on growing his business, an endeavor which he is starting small and humbly, but for which he has big plans.

Born in Cincinnati, Cashmere spent a rocky childhood in New York and New Jersey before moving to Seattle at age 14. Cashmere graduated Washington Middle School and attended Roosevelt before he fell in with the wrong crowd and dropped out before graduating. After a few years of hard living, Cashmere decided he needed to clean up and change his life for the better.

Cashmere bought a Polaroid camera and designed some paper picture frames with images and phrases such as “Ladies Night” and “Players Night”. Hustling around Pioneer Square during the dance club hours, he was able to sell photos to the groups of clubbers and partiers that filled the streets at night. Last summer, Foster Farms held a promotional event at a local beach where people could have their photo taken with people in chicken costumes. Cashmere noticed they were using a more modern Fujifilm Instax instant camera, which consumes much less expensive film. Cashmere noted the make and model and reinvested his Polaroid revenues into buying this new camera from Glazer’s downtown. Still working the club scene, Cashmere met a visitor from New York who suggested that he look into a portable digital printer, which would allow him to print higher-quality shots straight from a digital camera. Tourists and partiers bought up the photos and frames.

One day Cashmere stopped by a jewelry shop on the way to school. There, some inexpensive jewelry caught his eye. Cashmere spent $50 on an array of earrings and laid out the jewelry in a shoulder bag which he used to display his wares to his fellow students back at school. Cashmere’s easygoing personality made for easy sales, and he quickly saw that he could make a decent margin on the jewelry.

“When you do good, God provides opportunities for you,” Cashmere says. When he stepped into Awa Braids Express to have his hair braided, he also brought in his jewelry. “I got a $40 hairstyle and sold $57 in jewelry, and Awa said she liked my stuff, that I should think about renting out the space in the back of her shop.” After some introspection, some prayer, and a couple of meetings at the Starbucks at 23rd and Jackson, Cashmere decided he should set up his brick-and-mortar business. “I figured, what do I have to lose?” he said. 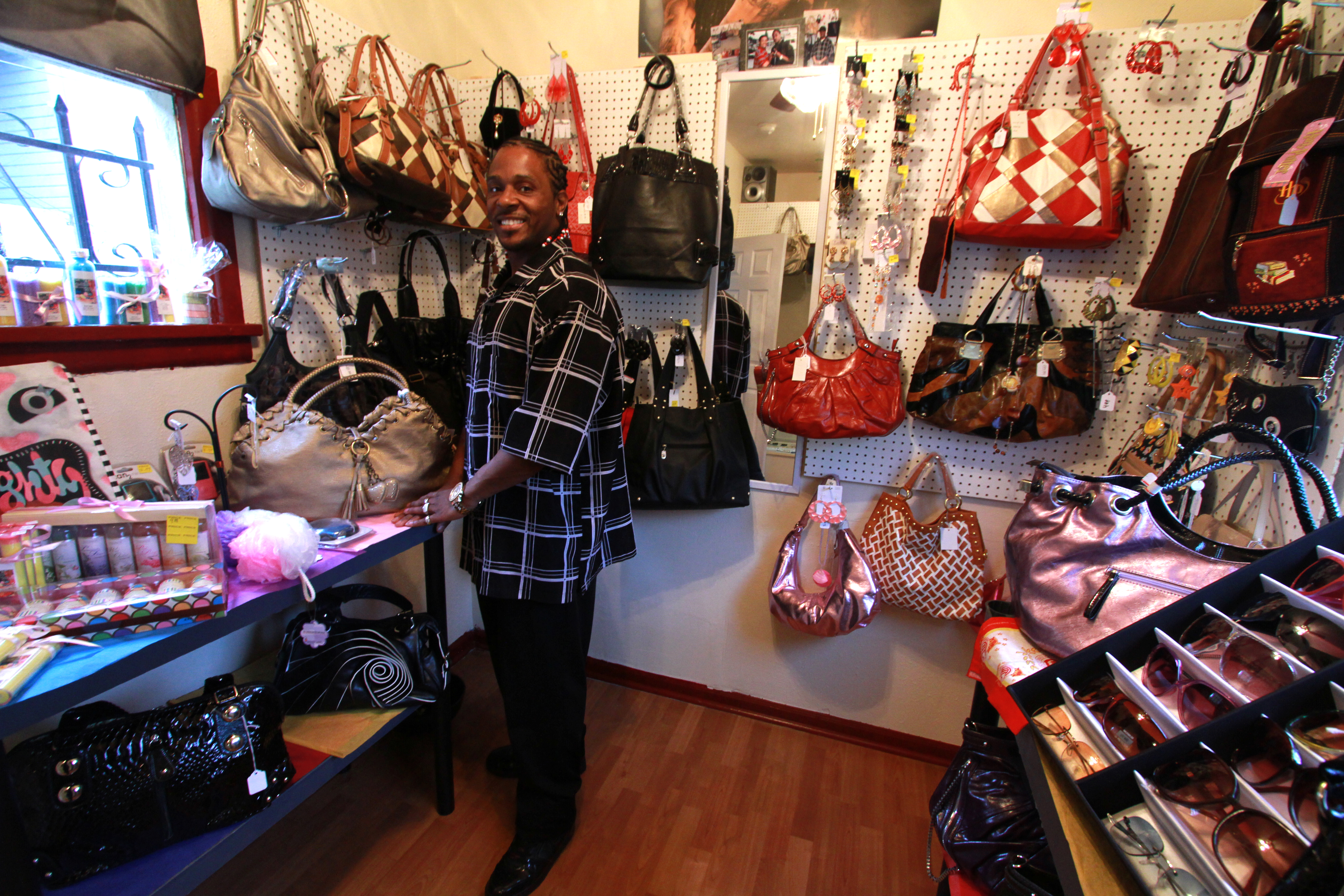 With R&B music playing softly in the background, Cashmere’s Fashion Earrings -N- Thangz boasts an array of jewelry, perfumes, handbags, and other accessories, sourced from suppliers based in Atlanta, New York and Los Angeles. “No knockoffs or anything—it’s all about fashion.” Like his other business connections, the suppliers fell into his lap; people he met while selling his photos downtown. “I like to network,” he said.

Cashmere assembled the whole shop by hand, buying paint and display supplies at the local hardware store. One day, he envisions expanding his shop to include a barber chair and perhaps setting up his mother in the lower level of the building to sell homemade food. In the meantime, he has plans in the works for a mobile hair salon with class. “A nice Access van, with a flat screen, and we’ll be on-call throughout the city.”

Despite the big dreams, Cashmere is approaching his ventures with caution and at a reasonable pace. “Slow is perfect for me,” he said, as he described keeping meticulous records of his business by hand since he doesn’t yet have a computer behind his counter. His employee, Trina, is equally personable, earnest, and thorough in her job. It was Trina’s suggestion to add the colloquial ‘z’ to the store name. She too came from a rough background and has taken the opportunity given to her by Cashmere to clean up her own life. Says Cashmere, “I remember where I came from, and that’s why I still wear my hair in braids, you know? But despite that, it’s important for people to realize that I’m not another gangster or something; that I am serious.” Indeed, Cashmere is an articulate and ambitious entrepreneur, soon to be armed with an education to back up his innate business acumen.

Aside from business, Cashmere sees it as his duty to help others who came from bad backgrounds. “I’m here to help the little people, and whoever make it, we break bread!” 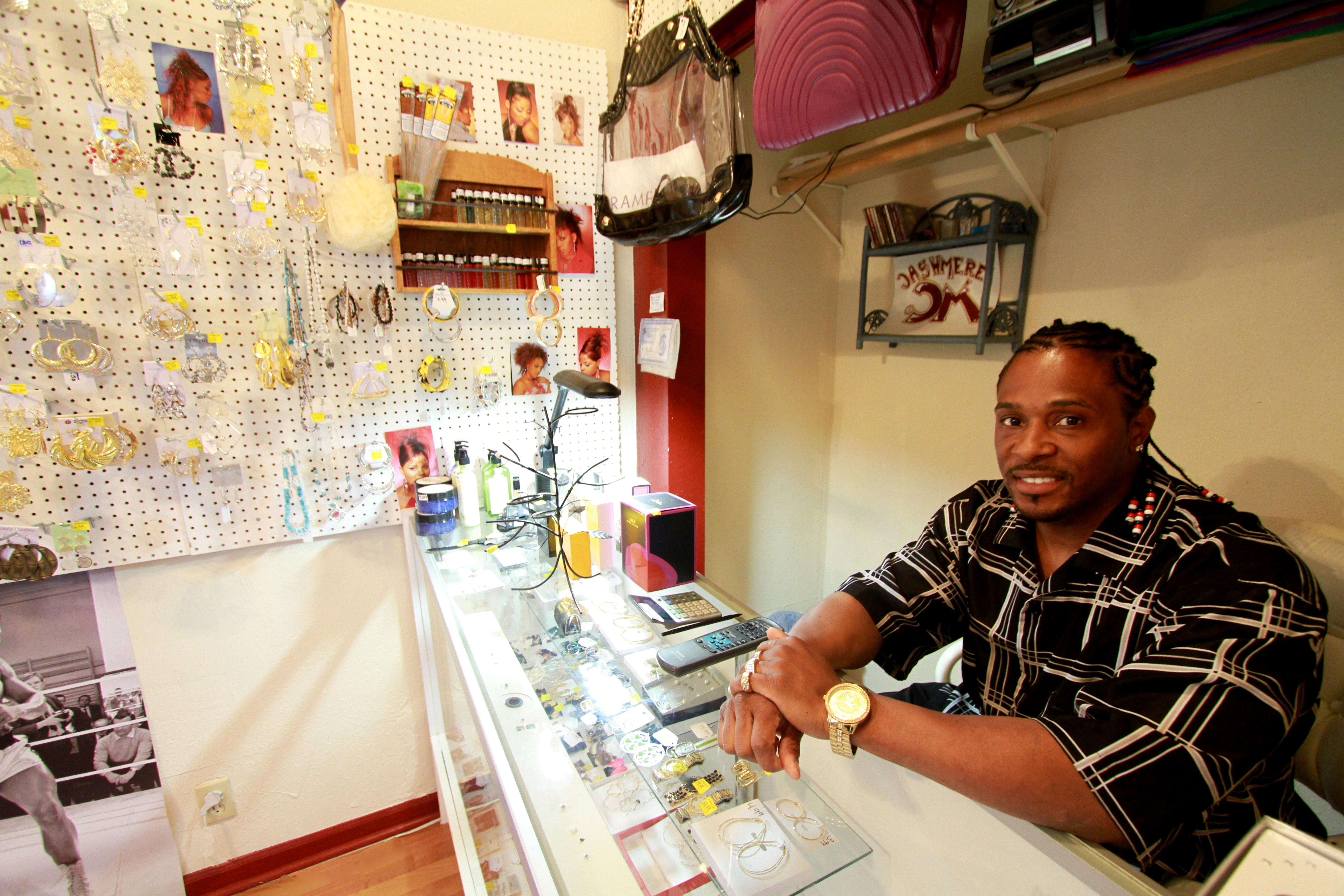