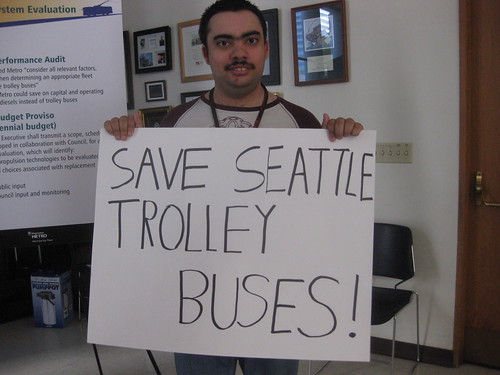 King County Metro is in the beginning stages of a year-long study that will try to answer an important question for the Central District: whether to keep electric trolley buses or replace them with some other technology.

In a public meeting tonight, a big crowd of people showed up to learn more and give Metro their feedback. The vast majority were big supporters of trolley buses and wanted to see them kept in Seattle. Sanjay Das (pictured above) was carrying a sign around the room that said “Save Seattle Trolley Buses!” He told us that he’s passionate about the topic because they “are clean, quiet, better hill climbers, and just plain cool.”

As we’ve discussed before, the projected cost of buying new electric trolley buses is much higher than diesel ones, leading the county to do an end-to-end comparison of all of the cost and environmental differences between various propulsion technologies. When the study is complete next year, it will include a recommendation to the county council, who will make the final decision on whether to keep the trolleys.

Here’s a few of the areas that the county has already identified as elements of the study:

The big question at this point is what else they need to add to that list. The first phase is “scoping”, to basically define the bounds of what the study will cover. And they’re actively soliciting public feedback to make sure that list is complete.

If you have items you’d like to see added, email them to [email protected]

Additionally, the county is very interested in any ways that the city can help reduce the cost of operation of the trolley system. We previously discussed two options for that, including lower electricity rates (small difference) and taking over responsibility for trolley line maintenance (big difference). They’re suggesting that people interested in those options make their opinions known to the city council.

0 thoughts on “Metro wants your feedback on trolley bus study”