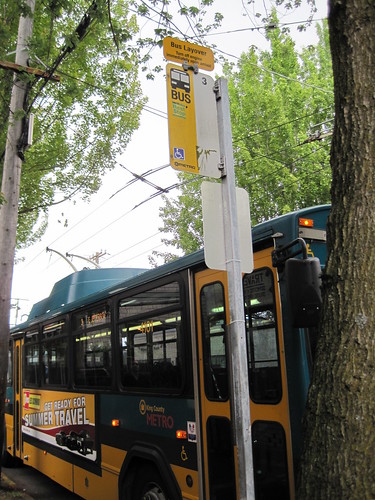 For decades, nearly half a block’s worth of retail storefront along 34th Ave has been perpetually blocked by #3 buses. At any given time, from one to three buses idle or camp out between routes at the layover station – much to the dismay of the businesses there.

That may be about to change.

This morning, a representative from the Metro Transit Division met with Madrona building and business owners to discuss the possibility of moving the bus layover out of the main business district.

The meeting came about after John Platt, one of the owners of St. Clouds, learned of Metro’s proposals about bus stop reduction on the #3 and #4 lines. Given that there are three bus stops, including the layover station, in essentially one square block (the block between 34th and 33rd and Union and Spring), he saw it as a win-win situation. Metro would be able to reduce costs by reducing stops, and Madrona businesses would lose one of their biggest headaches.

“If you look at this block here, you can see a business district that’s suffering,” said Platt, whose restaurant is completely blocked from view by the buses on a regular basis.

Other local businesses chimed in, including the owner of the travel agency directly in front of the bus layover station who said he tried to get the stop moved 30 years ago. Jason Weakley, a potential renter for the vacant space next to St. Clouds, said he had to seriously reconsider leasing the space because of the bus layover.

The business owners proposal is to move the bus layover farther south down 34th Ave to be alongside the Madrona Playfield, where it would not block any businesses. This would also open up valuable parking spots along 34th, and hopefully increase the chances of revitalization of the empty parking lot and house across the street.

“It would be a huge benefit for that to be moved,” said Nikola Davidson, president of BOOM (Business Owners of Madrona). “We want to present the most beautiful vision of Madrona that we can.”

Mary Bemowski, the transit planner from Metro’s Transit Division, explained the obstacles from Metro’s perspective. A “passing wire” would need to be added to the overhead trolley wire at the new stop, to allow buses to go around one another. The City of Seattle owns the right of way, so it would have to be involved in moving the stop. Other factors are accessibility of a comfort station for drivers and the effect on riders who transfer between the #2 and #3.

Still, Metro has said they will take “a serious look” at the situation. The next steps are for Bemowski to conduct an evaluation of the area, talk to service planners, present a plan and discuss it internally.

That won’t happen until mid-July, so we’ll keep you informed of any developments. The bottom line, though, is that moving the bus layover stop would be hugely significant for the blossoming Madrona business district – and for the first time in decades, the move looks like a possibility.