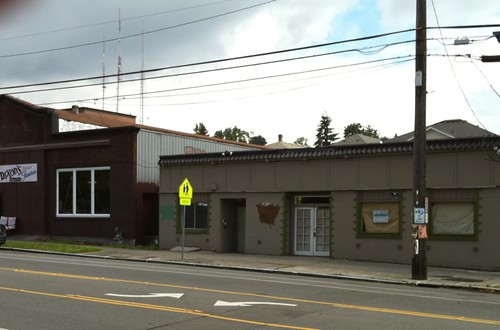 Thanks to tips from CD News readers, we investigated recent construction activity in the 900 block of 12th Avenue.  We spoke to Adel Abud, the individual authorizing the development at 908 12th Avenue and the owner of neighboring Majiles Cafe, about his plans for the site.  Abud confirmed that he is planning to open a Middle Eastern eatery called Habibi Restaurant.  He said that construction at the site has just begun and he hopes to open the restaurant by the end of 2010.

CD News reader Bill Zosel alerted us to the fact that 908 12th Avenue has historic significance for the city:  “This is the building on 12th Avenue that was the home of Doc Hamilton’s Barbecue also known as the 908 Club —mentioned extensively in Paul deBarros’s book “Jackson Street After Hours”.  Possibly the most notable ‘speakeasy’ in Seattle back in the day.”

The Seattle Times corroborates Zosel in an article they published in 1996 about the SPD’s Prohibition-era Dry Squad:

BUT ALTHOUGH A MAJORITY OF [SEATTLE]CITIZENS SUPPORTED PROHIBITION MEASURES, a similar number was unwilling to obey these laws once in force.

As a result, speak-easies multiplied, and rum runners and moonshiners happily provided all the supply they needed. Proximity to Canada ensured that the Northwest would have a steady, though high-priced, flow of liquor.

Trucks and cars loaded with cases of contraband jolted through fields and forests to sneak across the border, but the daring rumrunners, dodging Coast Guard patrol boats, brought most packaged whiskey into Washington. In high-powered speedboats, equipped with false bottoms or cleverly concealed compartments, they made nightly trips depositing their secret cargo on the docks and beaches of Puget Sound.

Roy Olmsted, a former Seattle Police officer, ran the most notorious and successful of these operations, reputedly netting as much as $200,000 a month.

Federal enforcement officers could not figure out how he consistently evaded them until finally learning that his wife, a radio broadcaster, relayed coded messages to the smugglers during her evening program of children’s stories.

One of Olmsted’s best customers was John “Doc” Hamilton, the urbane proprietor of Seattle’s most popular speakeasy. Doc’s Barbecue Pit on 12th Avenue near Marion Street attracted the cream of Seattle society with its fine cuisine and even finer selection of wines and liquor.

For many years, “Doc” was able to keep his business running by judicious payments to local law-enforcement officers and by the fact that most of the city’s high-placed judges and politicians frequented his establishment.