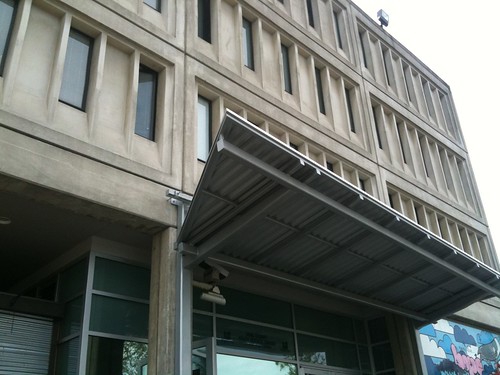 Today County Councilmember Bob Ferguson announced a proposal to raise the county sales tax one tenth of one percent to fund the construction of a new youth and family services building at 12th & E. Alder.

As we’ve discussed before, the current building is described by court members as “falling apart”. The list of issues was reiterated again today: failing heating and cooling systems, only a single elevator, cramped conditions for employees and the public, and even “gas emissions” from an old sewer system that occasionally affects some employees.

The proposed tax hike would be dedicated to this project, and would not solve any other county budget issues that are threatening the layoff of sheriffs and prosecutors. Ferguson said there was a chance that it could be tied to other tax proposals that would solve the other funding issues, but that he thinks the YSC replacement is a critical issue that could stand on its own.

But there’s several steps that have to happen before the tax can become a reality. First it has to pass the county council, picking up three more votes in addition to existing support from Ferguson and Councilmember Gossett. Council approval would put it on the ballot in November, where voters would have the final say.

Court administrators said this is “a very fiscally responsible plan” because the tax will pay for the project within 7 years, avoiding the cost of interest if the project was financed with 30 year bonds.

County leadership also stressed their commitment to work with the community to make the project fit well into the surrounding neighborhood, with more open space and private residential and retail development on the north end of the six square block property.