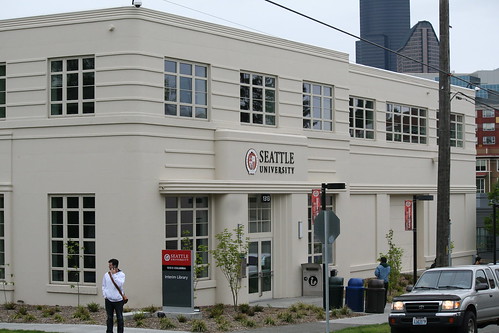 The art deco building at 14th & Columbia has been designated by the city council as an historic landmark, providing new controls over major alterations to the building’s exterior shell.

The original nomination for the building noted that:

Originally built as a Coca Cola bottling plant, the property was used as a service warehouse by PacBell and Qwest before being bought by Seattle University back in 2007.

The building is currently used as a temporary library for the university while their main campus library goes through a major expansion and renovation. That work is scheduled to be complete in the fall, at which time all of the books will be packed up and moved back to the main campus, and the 14th & Columbia building will transition into offices for school staff.

The staff in the city’s Historic Preservation office will tell you that historic designations are about managing change, not eliminating it. In fact, historic landmarks can even be torn down. But the designation adds a new layer of process, permits, and approvals whenever changes are proposed to any of the protected features of a property.