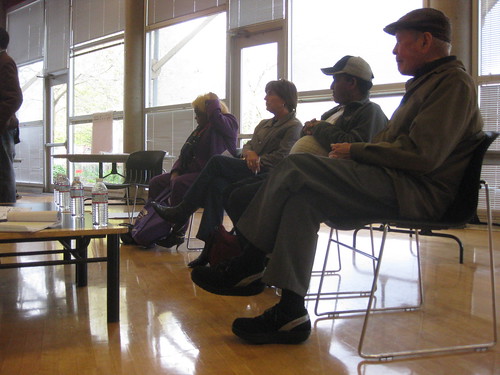 At the beginning of last night’s forum on neighborhood relationships, the moderator asked everyone to give their opinion on where things stand in the neighborhood: Improving, Stuck, or Getting Worse. The consensus was just slightly on the positive side of stuck. Of course the reasons for those feelings varied dramatically according to the individual, but the general feeling was while there’s some good things happening and some bad, there’s a lack of community coordination and cohesion that prevents us from making good forward progress without long-time residents feeling trampled in the process..

Here’s a few quotes from people who spoke:

The room full of people also broke out into four groups to talk through issues in specific areas of the neighborhood:

17th & Yesler: Focusing on previous disputes over Casa Latina’s arrival in the neighborhood, participants in the group said it was “congenial” and “great.” Of course it would be hard for anyone to complain since none of the predictions of roving bands of day workers came true.

28th & Jackson: Leschi neighbors talked a lot about gentrification, crime (and how it can be overblown), and got to know the owner of the corner store on the corner across from Flo Ware Park. The discussion seemed positive, with one participant saying “I was moved when people started to share how they felt” about those issues.

23rd & Union: Composed of business owners and nearby residents, the group took concrete steps to restart the old Union Business Group and try to build a tighter-knit community there. One key goal was to build a community “where its members know each other, welcome each other, understand roots of the community.”

22nd & Yesler: Focused on the controversial felon housing project, a lot was said, often passionately, but neither side felt like any progress was made. Residents around the project feel like the ill will in the neighborhood is very deep and potentially insurmountable, and project proponents said that “it was just like the previous meetings. Right now people are still emotional, arguing going back and forth.”