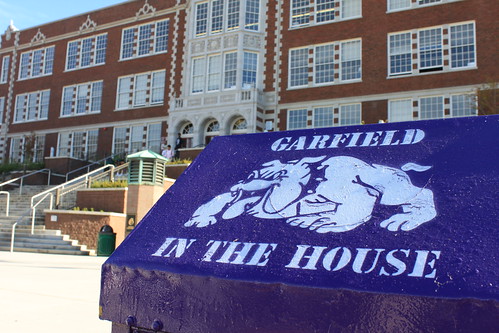 The Garfield High School Soccer Team won the KingCo Championship last night in front of a packed house at Memorial Stadium! Check out the link to the article in the Seattle Times. http://seattletimes.nwsource.com/html/highschoolsports/2011840973_newberry12.html

The inspired Bulldogs rode that emotion to a 4-1 victory over Skyline and their first KingCo 4A tournament championship, sending Garfield to the state playoffs for the first time since 2002.

“It was very important for me to show up,” said Martinez, a first-year Garfield coach whose injuries stemmed from being kicked in the face during a soccer game. “I’ve grown with this team just as they’ve grown with me. I wanted them to know they have my full support out there.”

Garfield players held the championship trophy high after the game while their coach kept mostly away from the celebration. It was the Bulldogs’ first appearance in the title game, often a showcase for Eastside teams.

“It’s huge,” senior captain Chris Perkins said. “It’s the culmination of all of our efforts.”

Come show your support at the State Tournament!