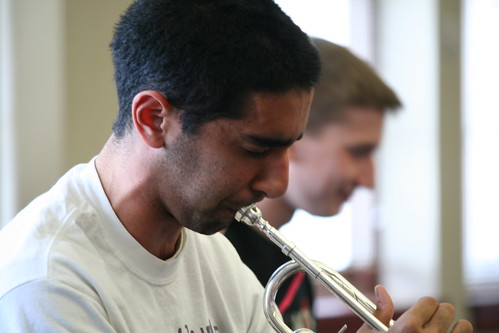 The proclamation cites their fourth first-place win at Ellington, their other wins around the country, and the history of band director Clarence Acox Jr. as key reasons for the day of honor.

WHEREAS, The city of Seattle is one of the nation’s most dynamic music cities, where a rich history feeds a lifestyle of musical innovation, inspiration, and talent, including young musicians whose creativity enhances our cultural life and inpires our community; and

WHERAS, Garfield won the competition for an unprecendented fourth time in the past decade and is the only band to win the competition in consecutive years, placing first in 2009, 2004, and 2003; and

WHEREAS, The basics such as reading, writing and math are an important part of a quality education; the arts – including music education – are integral to a complete education; and

WHEREAS, Clarence Acox Jr. – an instrumental figure in the Seattle music scene – has nurtured young musicians for the past 39 years as director of jazz bands at Garfield High School, demonstrating that a well-rounded music education can be key ot a student’s success in life and learning; and

WHEREAS, The Garfield Jazz Ensemble has toured Europe; performed with jazz greats such as Wynton Marsalis, Quincy Jones and Ernestine Anderson; won every major high-school jazz competition on the West Coast; and is rightfully regarded as a legendary part of Seattle’s jazz culture,

NOW, THEREFORE, BE IT PROCLAIMED BY THE MAYOR AND SEATTLE CITY COUNCIL THAT MONDAY, MAY 24, 2010, SHALL BE

A scanned PDF of the proclamation with signatures is attached above. 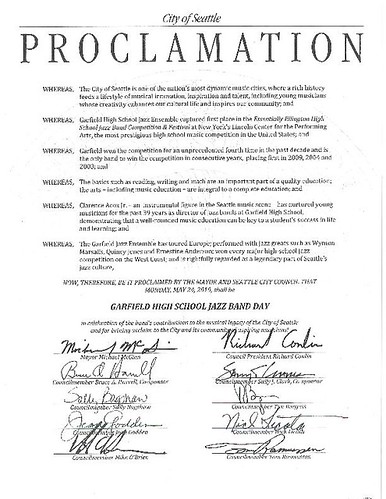