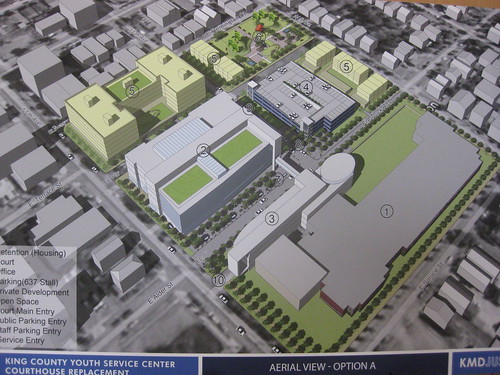 Last night’s community meeting on the redevelopment of the county’s Youth Services Center site included only slight refinements to the three design options we reported on last month. Apart from the controversial placement of green space in the project, each of the three options share the same overall features for the large six-block property:

As the 12th Avenue corridor continues to develop into a pedestrian-friendly home of new retail and residences, it’s that last point that appears to create the biggest challenge for how the redevelopment project integrates into the surrounding neighborhood.

The county’s architects say they are well aware of that challenge, and are working on ways to address it. Things will be slightly improved if new private development goes into the northernmost block along 12th. But that leaves two other blocks that could lack any connection to the pedestrian environment: one containing the blank wall of the new courthouse, and one with the existing large setback between the street and the 90’s era detention facility that will stay as-is.

The inner centralization of access to the courthouse is driven by security concerns. Architects say that industry standards for court facilities are designed to protect them from all threats, including everything from car bombs to drive-by shooters. Parking can’t be placed under the building, for fear of bombs. And the cost of manned security at entrance points limits the number of doors that can be placed into the building.

One architect at the meeting last night told us that they were looking at ways to include ground-floor retail in the new courthouse building along 12th. But security needs could make that an expensive proposition, requiring heavy concrete blast walls at the back, sides, and top of the retail spaces. The county’s budget on the project is tight, potentially making any pedestrian-friendly features a tough sell.

The county’s will continue working with architects to refine the redevelopment plans over the summer, potentially heading towards a November vote to approve funds for the project. 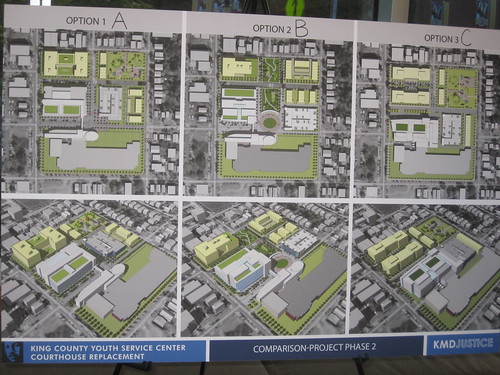