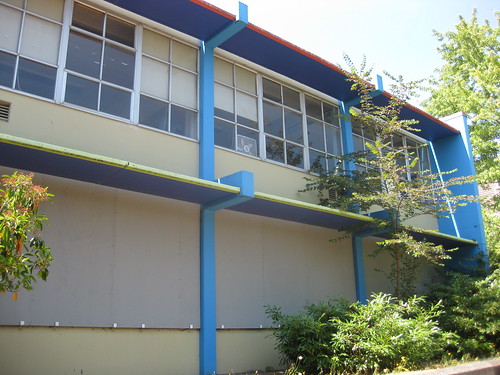 Seattle School Board member Kay Smith-Blum dropped a bombshell at the Squire Park Community Council meeting this weekend, saying that the private Hamlin Robinson school was about to enter a contract to lease the school from the district.

Located at the top of the hill at 18th & Union, TT Minor was closed after the 2008/2009 school year after an emotional battle between parents and the district, and now sits empty with its windows boarded up. The stated reason for the closure was low enrollment and expense of operating the old building.

Hamlin Robinson focuses on students with language problems such as dyslexia, and has outgrown their existing facility in South Seattle. They were one of four organizations who placed a bid to take over the old MLK school in Madison Valley, but have notified the district that they’re withdrawing from that in favor of a deal on TT Minor.

Smith-Blum stressed that the TT Minor property was going to be leased, not sold, and that this was the only option for the district to avoid the property reverting to city control after a 2-year vacancy. Hamlin Robinson was the only organization that made a lease proposal for the TT Minor building. The term of the lease will be for 3-5 years.

The long-term question is whether population growth in the Central District will support reopening TT Minor as a public school at a future date. Supporters of the school have always argued that the district was ignoring the number of new families in the area around the school and would be forced to reopen it as other neighborhood schools became overcrowded.

Smith-Blum said that was a definite possibility as the district has been relying on data from the 2000 census to drive their growth predictions. She said that the 2010 census will give them much more accuracy, and she’s also pushing to specifically count the young siblings of existing students and include those in the district’s projections.

If the local population does ever warrant re-opening TT Minor, Smith-Blum said that the district will retain the right to take the school back within 18 months of providing notice to the lessee.