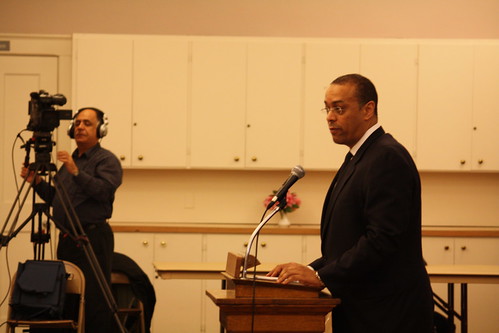 Thursday’s special meeting of the City Council’s transportation committee at First Hill’s Seattle First Baptist Church was positioned by city officials as a final opportunity for the community to provide public feedback on the planned streetcar line that will connect the International District to Capitol Hill via First Hill. Only eight people spoke, six of them spoke in favor of the plan. The meeting was over in under 40 minutes.

The plan can now move forward to a vote. Transportation committee head Council member Tom Rasmussen said the committee will take up the resolution to approve the plan in its next session on April 27. Assuming it passes out of committee, the legislation will move to the full Council for a vote on May 3.

Once that happens, there will be plenty more to talk about including how the Council and SDOT will finalize elements of the streetcar plan such as locations for storage and maintenance facilities for the new line.

James Kelly, president of the Urban League of Metropolitan Seattle and co-founder of the Street Car Alliance, voiced his support for the streetcar plan but also said the Council should be working harder to make sure the city has more “shovel ready” projects planned. “I’m here to encourage the Council to consider formal support for other small extensions to the streetcar network, such as a 10-block extension to Jackson in the Central District, extension of the South Lake Union line to Eastlake and to Pike Place Market,” Kelly said. He also wins points for asking the Council to get on board the  “The Love Train” and support the extension to 23rd and Jackson.