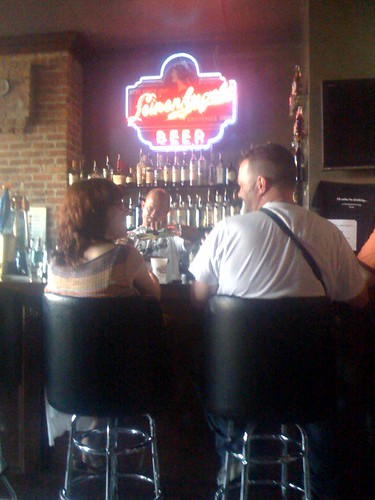 Jason Stratton of Spinasse made the cut and was deemed a Food & Wine Best New Chef for 2010 earlier this week.  When Food & Wine profiled him, they asked him to name his favorite television show.  He admitted that he was a Top Chef fan and that he likes to wach it (along with other culinary profesionnals) at our very own Bottleneck Lounge:

Favorite cooking show: Top Chef. “It’s one of the only cooking shows that respects what a chef does on a daily basis. Every Wednesday night, my chef buddies and I watch it at a bar—The Bottleneck Lounge. We yell at Padma [Lakshmi, Top Chef host/judge] for her bad outfits. (Just kidding Padma! Much love Padma!) It’s like we’re at a sporting event. Someone will say, ‘I can’t believe he gave that sauce to Tom Colicchio!'”

The new season of Top Chef is currently filming in Washington D.C. and will begin airing in September. Though Stratton does not mention it, you may catch him watching Top Chef’s spin off Top Chef Masters at Bottleneck, on Wednesday nights at 10 pm.