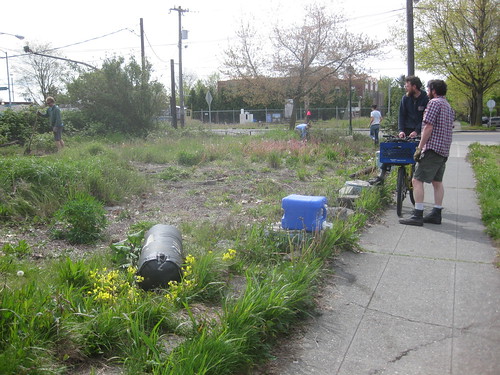 A group of about a dozen community members were out cleaning up the long-vacant lot at 22nd & Union today, preparing it for a new community garden. Project organizer Bryan McLellan told me that they’re hoping to get everything cleaned up, tilled, and ready to plant by summer.

It’s the second project by Alleycat Acres, which hopes to turn vacant lots all over town into working community gardens. Their other garden is already growing up on Beacon Hill across from the golf course.

Here’s how the project was described in a Seattle Times article back in February:

Ultimately, Alleycat envisions running such gardens as community-supported agriculture outfits — known as CSAs — in which low-income residents would pay not on a traditional monthly basis but on a more affordable weekly, sliding-scale basis. The group hopes to take its green efforts one step further by using bicycles to deliver the fruits and vegetables of its labor to those residents — hence the name Alleycat, a term used by bike messengers.

Anyone who wants to get involved can hook up with Alleycat Acres on their website or Facebook.