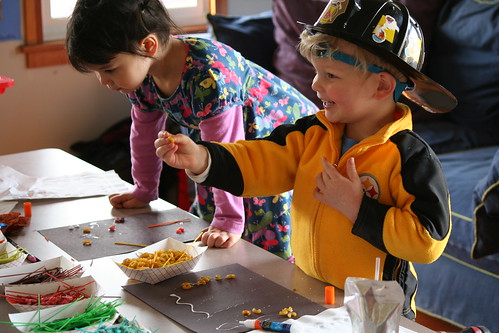 We stopped by the Valley School this morning where a group of parents and their kids were busy creating art with construction paper, colored pasta, and glue. The goal was to continue to push and hope for the school district to turn the old MLK Elementary building over to their community group to serve as a community center for the Madison Valley neighborhood.

Kimberly Larson, a parent and the Vice President of [email protected], told me that the use of pasta was symbolic, as the community used to hold community-building spaghetti dinners at the MLK school before it closed down.

The timing of a decision is still uncertain, as they weigh proposals from four groups, including a large cash offer from the Bush School which occupies the properties east of MLK. Bush has proposed demolishing the old MLK school building and replacing it with athletic fields.

Larson said that they’ve received word that the school board may have additional news in a few weeks, but it’s not clear if that will be a final decision or another step in the process. An August permitting deadline is quickly approaching which would make it very difficult for any of the three groups who want to keep the building, due to required upgrades that would likely be financially infeasible.

Citizens interested in supporting any of the options for the MLK property can contact the school board at http://www.seattleschools.org/area/board/index.dxml