Last night the members of the 22nd Avenue Blockwatch sent us a new statement on the negotiations between them and Revered Jeffrey of New Hope Baptist Church regarding the pastor’s plans to set up transitional housing for felons on their block:

We, the members of the 22nd Avenue Block Watch and Community Group, an organization that has been meeting regularly for more than 35 years, recognize the importance of and need for housing in helping inmates transition back into our society.  We have supported other causes promoted by Reverend Jeffrey and Black Dollar Days Task Force over the years.  However, due to the lack of planning, the absence of prior community notification and input, and the numerous organizations supporting vulnerable populations in proximity to the proposed location (including housing for seniors, day care centers, and schools), we believe it is necessary to proceed in a measured and responsible manner.  As our talks with the Reverend and BDDTF continue, we urge him to address all of our concerns expressed in our letter of February 25, 2010, as well as any expressed by us or by other neighborhood organizations in the process of reaching a Good Neighbor Agreement.

The referenced letter, which was read at a community meeting last Monday, is attached above.

Revered Jeffrey made it clear last Monday night that he’s looking for a quick negotiation on the Good Neighbor Agreement, which would put bounds around the operation of the residence and help protect the interest of the neighbors around it. However, the tone of the statement, such as the need to “proceed in a measured and responsible manner”, appears to indicate a desire of residents to move forward more cautiously.

The next meeting on the subject is scheduled for this Monday night at 7pm, where SPD Director John Hayes will mediate the next phase of discussion between the neighbors and the proponents of the transitional residence. 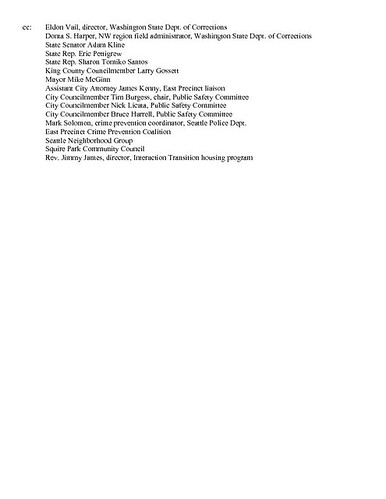