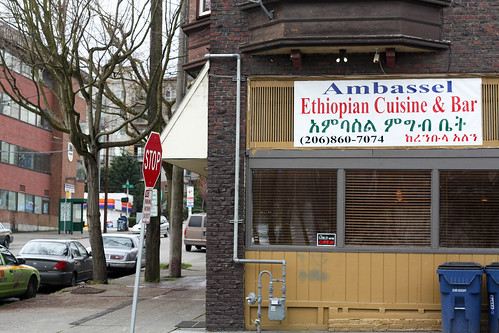 Sometimes we like to depart from eggs and toast for weekend brunch.  Other than cooking at home (we tend to make chilaquiles), there are only a few choices.  One delicious option we have is to go down to B&O Espresso for their Foul (can be served with/without egg).  Crosscut published a recent article praising the Foul at Ambassel.  Here is how they describe foul:

Foul (also spelled fuul or ful and pronounced fool) is the classic breakfast of the Red Sea region, eaten in Egypt, Sudan, Somalia, parts of the Middle East, and Ethiopia. Preparation and garnish varies by region, but the basic idea is the same. Foul is mashed up fava beans, topped with egg, occasionally with meat, and served with bread, commonly pita, but here in Seattle with French bread — lots of it. 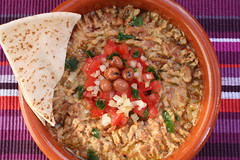 We attempted to try the foul at Ambassel this morning at 10:40 am but found them to be closed. According to Crosscut, they were to open at 10 am, and you may be able to see the open sign in the window in the photo at left.  They appear to have taken over the space formerly occupied by Addis.

Crosscut and some others recommend the foul at Cafe Selam.  What say you guys?  Have you tried either Ambassal or Cafe Selam?  If you have, let us know what you would recommend there in the comments.

0 thoughts on “Foul at Ambassel”