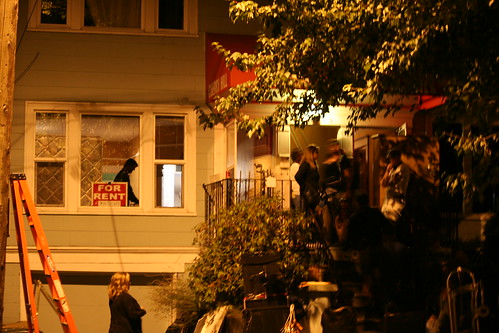 There was a small crowd of onlookers in the 1900 block of Cherry tonight for an additional neighborhood shoot of The Details, starring Tobey Maguire (of Spiderman fame). A crew of about 25-30 were milling about, hauling gear in and out, setting up for a scene inside the first floor apartment on the east side of the building. There was also activity in the western apartment, but the windows were blacked so that part is a mystery.

There were no confirmed star sightings, but my fellow onlookers thought they spotted Maguire at one point.

Not everyone was glad to see the production, with some neighbors flooded with diesel fumes from the generators