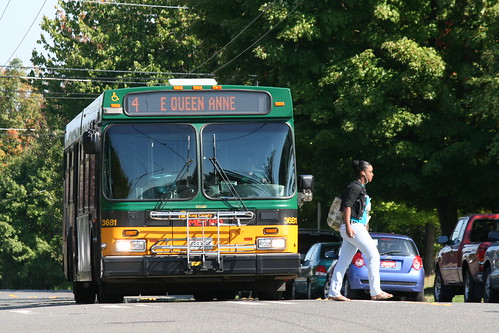 With Metro trolley buses in the crosshairs of the beancounters, is the recent weekend use of diesel buses a sign of the future? According to Metro spokesperson Linda Thielke, the answer is no, with recent diesel usage being due to seasonal summer construction, not any sort of cost-cutting move.

For example, the city has been going full-bore this summer to resurface downtown streets. Additionally, private construction firms often need to shut down arterial lanes to bring in cranes and other equipment. Since either of those can block the routes that contain the trolley bus wires, Thielke said that the county works with the city of Seattle and other firms to make sure any route-interrupting road or building construction happens on a weekend. And it doesn’t have to be a neighborhood project to disrupt a bus line – any blocking issue along the entire bus route can require the temporary use of the diesel buses.

Metro doesn’t have enough spare diesel buses during the week to provide service to electrified routes. But lower weekend ridership frees up enough of them to service the trolley bus routes when needed.

The good news, at least for those that live along an electrified route, is that the downtown paving projects are coming to a seasonal close. So we should all see the normal, quiet, electric buses return to our neighborhood routes in the next few months.

0 thoughts on “Trolley Buses: Why they’ve been MIA on weekends”