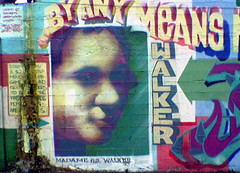 The Seattle Police Department’s new approach to dealing with drug dealers was formally rolled out this week. Central District News told you the program was coming back in June:

Last night SPD Capt. Paul McDonagh and Deputy Prosecutor Tienney Milnor started to collect community feedback on a different approach that has seen success in a few other cities around the country. It would take people picked up for low-level drug dealing and give them a choice: stop dealing and work with the community to clean up your act, or else have the book thrown at you for your offences.

The program’s first focus area will be 23rd from Madison to Jackson:

The Seattle Team selected the 23rd Avenue Corridor, located in the city’s Central District, for the initiative’s pilot area because of residential and business communities  ongoing concerns and requests for action; supporting SPD data; both the Seattle Police’s East Precinct Commander and the City Attorney East Precinct Liaison believed the project fit with the communities desire to  try a new approach;  the area contains many active community members, business, and social services providers who could be partners in the effort; and the area had all the attributes needed to best replicate the successes in North Carolina.

The program got started Thursday night with a session involving 16 suspected area drug dealers. CDNews, which has covered the development of the program extensively, was invited to take part in the community meeting but was unable to attend. The Seattle Times reports:

The Thursday night gathering at the Langston Hughes Performing Arts Center was an invitation-only event, where uniformed officers checked names at the door and a who’s who of Seattle’s criminal justice system sat alongside the dealers’ families, friends and fellow community members. For an hour, a parade of speakers took the stage to encourage the dealers to take the first-of-its-kind deal to ever be offered in the state. The “candidates,” as they are called, were told to listen without comment or question.

When the hour was up, everyone filed out except for the dealers and their “people of significance” — a parent, a friend, a spouse — who were asked to stay and ask questions of the neighborhood service providers who were there to help them change the trajectory of their lives.

“I’ve already bought drugs from you. These binders, these are the cases I’ve got on you,” Capt. Paul McDonagh, commander of the Seattle Police Department’s East Precinct, told the men and women seated before him. “We’re not playing. You have to stop today. … And if you don’t stop, we will stop you and you will go to prison.”

Despite McDonagh’s tough talk, SeattlePI.com put another spin on the meeting, headlining its report on the night “Prosecutor to suspected drug dealers: Stop selling and we’ll let you walk away.”

Other headlines from around the city:

Finally, here’s the full announcement from SPD about the new program:

A broad-based community and law enforcement partnership announced today completion of the first operation of the Seattle Drug Market Initiative, an innovative strategy designed to reduce or eliminate overt street drug dealing in Seattle’s residential neighborhoods.  Based on a model first developed and successfully implemented in High Point, North Carolina, the Seattle initiative resulted from a United States Department of Justice technical assistance training award that was given to the city under the Drug Market Initiative (DMI) program.  Following the successes in North Carolina, the Department of Justice began awarding DMI training awards to jurisdictions interested in developing their own initiatives. Nearly twenty jurisdictions around the country, including those in Milwaukee, Nashville, Chicago, Indianapolis, and Hempstead, New York, have received federal training in implementing the approach.  Former Police Chief Gil Kerlikowske and City Attorney Tom Carr spearheaded the successful effort to obtain technical assistance after seeing the promising results from other jurisdictions.  A Seattle DMI training Team, consisting of representatives from the Seattle Police Department, the Seattle City Attorney’s Office, Seattle Municipal Court, and the Seattle Neighborhood Group, received specific training on how to develop and implement the initiative.

The Seattle Team selected the 23rd Avenue Corridor, located in the city’s Central District, for the initiative’s pilot area because of residential and business communities  ongoing concerns and requests for action; supporting SPD data; both the Seattle Police’s East Precinct Commander and the City Attorney East Precinct Liaison believed the project fit with the communities desire to  try a new approach;  the area contains many active community members, business, and social services providers who could be partners in the effort; and the area had all the attributes needed to best replicate the successes in North Carolina.

The broader Seattle DMI partnership includes the King County Prosecutor’s Office, the United States Attorney’s Office for the Western District of Washington, various other federal law enforcement agencies based in Seattle, and the Washington State Department of Corrections.  Community partnerships are also critical to the success of a DMI program and a number of citizens, groups, and businesses stepped up to support the community efforts.  Community partners supporting the effort include various citizens, faith based providers and community groups in the area, including the East Precinct Crime Prevention Coalition, and social services partners such as the Washington Department of Social & Health Services, Sound Mental Health, Seattle Vocational Institute, Therapeutic Health Services, and many others.

The Drug Market Initiative involves several steps.  A residential neighborhood experiencing an overt open-air illegal drug market is identified through citizen complaints, community input, police calls for service, surveillance, and crime data.  Active sellers operating the drug market are identified.  The police conduct a series of undercover operations making multiple “controlled buys” from these active dealers with the goal of breaking up the operation of the market.  Drug sellers encountered are separated into two groups based on their criminal histories – higher risk offenders who have crimes of violence, weapons offenses, or deal in volume and lower risk offenders who do not have crimes of violence in their histories.

The lower risk sellers’ positive “influential”, often a family member or close friend are identified, contacted by DMI members and requested to help encourage eligible offenders to take advantage of the DMI opportunity to positively change their life. The lower risk drug sellers are advised of their criminal behavior at a “community Call-In” and are given an opportunity to avoid prosecution by immediately ceasing their drug dealing & criminal activities.  These lower risk sellers are offered community support and community-based social services help to assist them in redirecting their lives.  Those sellers who refuse to stop their drug dealing are prosecuted to the fullest extent of the law. Higher risk drug sellers are prosecuted in the traditional manner through a coordinated effort between City, County, and Federal Prosecutors.  The community and law enforcement partnership works together to prevent the return of the drug market and improve quality of life in the neighborhood.

· Under traditional prosecution, lower risk sellers are arrested and prosecuted for a single criminal event.  Under DMI, these sellers supporting the operation of the market are brought together and collectively confronted with their dealing in a community Call-In prior to arrest and prosecution.

· Under traditional prosecution, the prosecution effort is generally directed at a specific person and event.  Under DMI, the focus of the community and law enforcement partnership is to dismantle the drug market.

· Under traditional prosecution, the community is rarely involved in the prosecution effort and often does not know the end result of their calling the police about drug dealing. Under DMI, the community is engaged with increased emphasis on community and law enforcement working together.

· Under traditional prosecution, the low risk dealers, if convicted, are sentenced to prison or ordered into services/treatment, and are jailed if they fail to comply.  Under DMI, such sellers are offered mentoring/ services/ and treatment prior to prosecution.  Such dealers are not required to accept this help, but are required to stop their criminal activity or face swift legal action.

The community plays an important role in the Drug Market Initiative by:

· Being watchful of and immediately reporting subsequent crime such as narcotics selling activity to the police.

· Working with community and law enforcement efforts to increase quality of life throughout the neighborhood.

· Helping to direct low risk sellers to resources in the community that can assist them in becoming law abiding members of the community.

· Providing support to lower risk dealers who are prepared to cease criminal activity.

· Reasserting community control over their neighborhood and reinforcing the message that drug dealing will no longer be tolerated.

Interim Seattle Police Chief John Diaz believes the initiative will give Seattle a new tool to combat street drug dealing, stating “DMI has had tremendous success in other areas of the country.  We want to replicate that success with this new, innovative approach to the open-air drug markets operating within our neighborhoods.”

King County Prosecuting Attorney Dan Satterberg added, “It’s time for a new approach in stopping chronic drug dealing in our neighborhoods. Together with community leaders and members of the neighborhoods most affected by the constant flow of drugs, we hope to give people a better choice than the revolving door of dealing a small amount of drugs and going to jail.”

City Attorney Thomas Carr said that the “DMI represents a partnership between a community affected by an open-air drug market and the criminal justice system.  They actively work together toward a common goal of ending the harmful impact of drug dealing.”