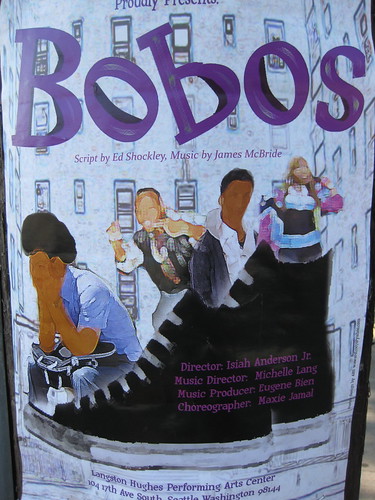 A group of teenagers have been working very hard this summer rehearsing for the first local production of Bobos, an award-winning “urban opera” about youth living in Seattle.

From the city press release:

The story line involves Alfred, played by 15-year-old JK Lewis. Alfred’s parents give him Bobos (cheap, bargain basement knockoffs) for his thirteenth birthday.  No one understands his dilemma, and so it’s out into the streets where he is promptly tortured by the entire neighborhood including the Autobots, a local gang led by Brick, played by Jayson Lowe.  Gerald, an undercover cop posing as a homeless man, played by Otieno Terry, tries to help and things turn ugly.  Alfred is tempted to take the wrong path.  Other characters engaged in this dilemma are Phyllis, the mother of the community, played by Michaelyn Thomas and Chelsea Muskelly.  Heleina Gartrell and Kianna Lewis play Doris, the dorky friend of Alfred’s family.

Check out the video above which has a snippet of the kids performing at the Umojafest parade two weeks ago.

Tickets are a very reasonable $4-$12, and are available before the shows at Langston Hughes, or online at brownpapertickets.com

0 thoughts on “Playing This Week at Langston Hughes: Bobos”