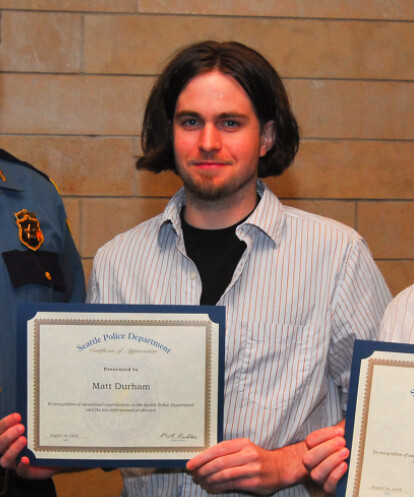 Matt Durham, aka “cdguy“, my youngest brother, my only brother, died earlier today at the unreasonable age of 30.

He leaves behind a family who loved him very much, with some who wish they would have told him so much more often.

He was smart, gifted in art and music, and unfailingly loyal to those that were close to him.

He was born on Groundhog Day in 1979 in Lubbock, Texas. On that day, his older brother and his dad picked out a gift, a plush stuffed dog, from the large bin of them at his dad’s pharmacy and took it to him in the hospital. He almost didn’t survive his early days, when a medical issue initially stumped the doctors at Lubbock General. Luckily his grandfather, an immensely knowledgeable and resourceful small town doctor, was on hand and immediately diagnosed the problem, leading to a healthy baby.

He was one of the most fun, energetic kids you could meet. In his preschool years, he developed a talent for flushing his older brother’s Star Wars figures down the toilet, and could almost always be found dressed as a little super hero, with either a reversable Batman/Superman cape, or a Spiderman outfit that would stir him to tell people “I’m going to fro my web at you!”

As a kid he maintained his good cheer even when his older brother did mean older-brother things to him. To this day, that brother cringes at knowing that Matt once told a beloved elementary school teacher that the thing he most wanted in the world was for his brother to be nice to him.

He would spend long summers at his grandparent’s house on Lake LBJ, where he would swim and fish and and ski and jetski up and down the length of the lake. His skin would tan to a dark brown, his hair bleach to near blond, and the bottom of his feet would turn black from his careful avoidance of shoes. He would sit in his granddad’s lap and steer the family boat, chirping excitedly all the way. When not in motion, he would sit on the porch with his family and talk almost non-stop.

In 1989, Matt took a trip to the great Pacific Northwest with his grandparents and brother, starting in Oregon, through Washington to British Columbia, and then back south again. He insisted that they stop at every aquarium that came across their path, no matter how homely looking or disreputable it might appear. He caught enormous salmon at the mouth of the Columbia, and gazed at trees in sizes and numbers that were unthinkable to a boy from the high, dry plains of Texas. He even survived the occasional punch to the arm or verbal fight that would erupt after too much time spent in the cramped back seat of a rental car.

Matt’s brother vividly remembers when the family said goodbye to the brother in the stairwell of a hot, un-air-conditioned dorm in College Station Texas. The brother saw tears streaming down Matt’s 13 year old face, and soon found himself to be in tears too. That was the first time the brother realized that he too often took his family’s love and presence for granted.

Matt was by far the most athletic member of his family. He was successful at basketball in elementary and junior high, before his Durham height became too great a disadvantage. In high school he joined the Monterey Plainsman baseball team, coached by the legendary Bobby Moegle. Playing outfield and using his speed as a pinch runner, his team won the Texas 5A Championship in 1996.

He graduated from Texas Tech in 2002 with a degree in bio-chemistry. He had always wanted to follow in his granddad’s footsteps and become a doctor, but his grades and test scores weren’t quite enough to get him there. He worked in a Lubbock ear, nose, and throat doctor’s office for several years, eventually becoming office manager and known for keeping a busy, multi-doctor, multi-million dollar office in tight working order.

In his college years, Matt developed an unexpected artistic streak. He picked up painting and produced a series of unique, amazing portraits of friends and family. Like a lot of the best art, he gave them to his subjects as gifts, things that will be forever cherished by those who hold them.

He also had amazing music skills. Although he could not read music, he could hear anything and reproduce it on the piano or guitar. He learned entire classical piano pieces by ear and played them almost flawlessly.

In late 2006, Matt’s brother invited him to move up to Seattle and join him on a crazy adventure, to become the #2 employee of a new software start-up. It was a risky move, as Matt didn’t have a formal tech background and the two brothers had hardly spent any time together since the older one left for college fourteen years earlier. But Matt came prepackaged with some key qualities: intelligence, an amazing work ethic, eagerness to learn, and no need for fancy living.

After a visit to Seattle in February of 2007, Matt decided to take the plunge and moved into his brother’s upstairs apartment later that May. With only a few information sharing lessons and a few books, Matt quickly became an expert in the world of CSS and HTML and applied his native artistic talents to the world of computer graphics. He could solve almost any problem in the world of web-page coding, even the endlessly frustrating ones with Internet Explorer. He ended up designing every user interface used in Instivate’s family of products, with the exception of the old crusty one you’re viewing now which predated his arrival in Seattle. He and his brother worked together better than they could have ever thought, getting to know each other all over again as adults, amid two and a half years of working together in the same cramped upstairs office. His brother’s respect for his talents and dedication grew every day.

Matt’s family is still struggling to understand his sudden death, and wondering how we’re going to get by without him. He is survived by his mother Susan and father Paul, his brother Scott, his maternal grandparents “Mer & Granddad”, and his paternal grandmother.

He will be greatly missed, and will be an example to all of us that youth doesn’t ensure anything, and that it’s never too soon to tell those close to you that you love them, that they’re great, and special, and that the world would never be the same without them.

Services are not yet scheduled, but will most likely be held later in Texas.