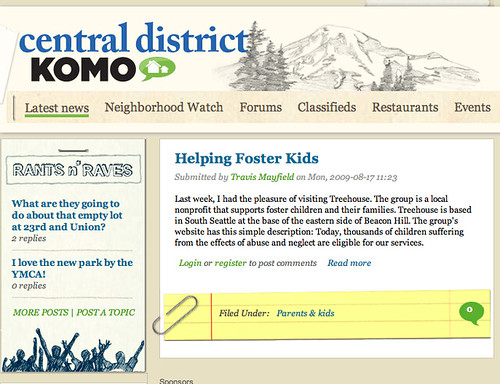 In the last couple of years Seattle has become home to a unique population of indie neighborhood news sites. Capitol Hill Seattle and West Seattle Blog were the first (and still probably the best), and we think our October 2007 launch makes us #4, after Blogging Georgetown. And since then, we’ve used our Neighborlogs platform to create a network of a dozen different sites in neighborhoods across Seattle.

They’ve all been growing wildly in traffic and attention. This site alone clocked a record 156,000 page views in July, and our Neighborlogs network had 79,000 unique visitors. That kind of traffic tends to get attention, and the big corporate media outlets have taken notice. The Seattle PI (owned by the Hearst corp) launched their first neighborhood blog last month on Queen Anne, and today KOMO TV launched a series of neighborhood sites citywide, including one here in the CD.

The new competition validates the long hours we’ve spent building this platform. The attempt to duplicate our features is especially flattering. But unlike these centrally-driven groups, we actually live in the communities we cover. We hear when sirens go flying down 23rd Ave, get out and go to neighborhood meetings, and discover local news when we’re just out walking around with the Newshound. And we’ll probably understand that a south Seattle shooting and a SODO gas leak aren’t actually in the Central District. (Update: those posts were removed from their front page after we pointed them out)

TV has a long history of regurgitating stories they find elsewhere, often without attribution. And so far, it looks like the online efforts will be no different. But we’ll still be here with detailed, timely, original coverage of the things that are important to our neighborhood.

And remember that advertising is what keeps your favorite indie site in business. Anyone can advertise on CDNews, and reach thousands of people right near them, for as low as $2.50 a day. So if you happen to notice that your favorite business is not an advertiser, or see a local business advertising on a corporate site, be sure and ask them to support CDNews the next time you’re in their shop.

0 thoughts on “Corporate Media Arrives in the CD”