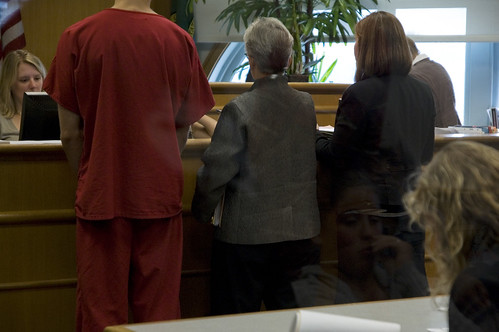 Tristan Appleberry entered a plea of not guilty this morning in an arraignment hearing. He faces charges of murder in the second degree for the July 22nd shooting of Aaron Sullivan.

According to Neighborlogs intern Lucas Anderson, who was present at this morning’s hearing, it was a routine affair that provided few additional details in the case. Apart from the plea, Appleberry was given a no-contact order for a list of witnesses in the crime. The court judge would also only allow photos from the neck down due to “identity issues.”

King County prosecutors made the for second degree murder due to the difficulty in proving premeditation in the shooting which occurred in front of Appleberry’s home in Leschi. Those charges could be upgraded if additional information comes to light in the case. According to previously filed court documents, the incident was spawned by an ongoing dispute over a girl between friends of Appleberry and the victim.

Appleberry remains in custody at the King County Jail on a one million dollar bail.

0 thoughts on “Appleberry Pleas Not Guilty in Leschi Murder”