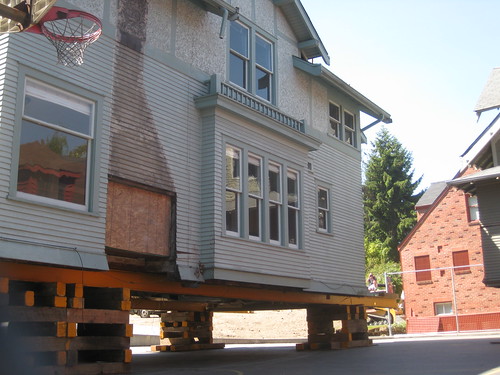 It’s a rare opportunity to see some really big things move down a really small city street. This Saturday at 10pm, the two houses rescued from the expansion of Epiphany School will slowly make their way down E. Howell St. and down the hill to their new lots in Madison Valley.

Yesterday commenter “It’s on” gave us the tip that a resolution had been reached between Nickels Brothers House Moving and a group of neighbors on E. Howell. As we told you last month, those residents were resisting the move due to the impact it would have on the trees that reach over their narrow street. Today we got hold of Jeff McCord from Nickels Brothers, who said that they’ve struck a deal with the E. Howell homeowners to replace any trees that need to be removed, and to plant additional ones along the street to compensate for the overhanging canopy that must be trimmed back to make way for the houses. Nickels Brothers is also guaranteeing all of the trees for continued health.

McCord says that he and the owners of the moved homes are “very thankful to the Howell neighbors and other people in the neighborhood for being accommodating” of the move, and he’s glad that they were able to find a long-term solution to the issue of the trees.

Want to watch? McCord says that spectators are welcome, so make some coffee and bring your cameras. But be aware that safety will be their biggest focus – move-watchers will need to stay on the sidewalk even after streets are closed due to the constant movement of utility crews and other heavy machinery. They’ll also need to stay at least 50 feet away from the moving houses at all times.

Here’s the schedule for the move:

Here’s a rough map of the route:

View Untitled in a larger map

0 thoughts on “The Madrona House Move is On for Saturday”