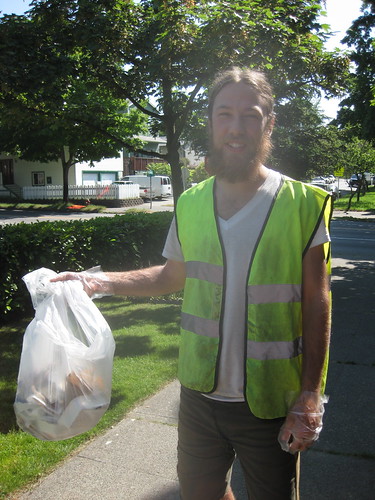 CDNews World HQ is within snack-eating distance of the AM/PM at 23rd & Cherry, so we get our fair share of trash that needs to be picked up along the borders of our estate. But we’ve noticed that things have been cleaner in the last month, in spite of the increased foot traffic with the nice spring weather we’ve had.

This morning on the way home from an errand I met one of the people responsible for that increased cleanliness. Kelly is a member of Tent City 3, which has been set up at 22nd & Cherry since late April, and he was out on one of their multi-daily patrols on the blocks around their camp. Armed with gloves and a big trash bag, he was picking up all of the trash that he found along the way.