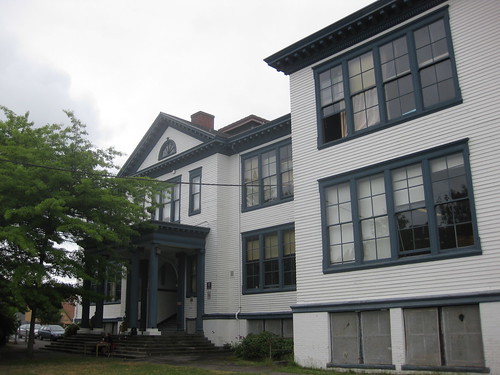 It’s the last day of school in the Seattle School District, and possibly the last day of school forever at two Central District facilities. After a long battle with local parents, the district decided earlier in the year to close Mann building and move the NOVA students from the Meany Middle School to the building in Miller Park. The middle school program at Meany is also getting the axe, with existing students there being assigned to new schools according to their home address (it sounds like most are going to Washington Middle School on Jackson).

In addition to a lot of dispersed students, the move will leave us with two empty buildings. I spoke to school spokesman David Tucker yesterday and he said that the buildings will remain a part of the district’s inventory, with a possibility of reactivation if the district ever decides that neighborhood demographics warrant it. He also said that there is no plan to sell the buildings. But realistically that is completely at the option of the school board, which could pass a resolution at almost any time to dispose of surplus property.

Neighbors of the two buildings are understandably concerned about what will become of the empty properties. Mr. Tucker said that there is custodial staff that will still be assigned to take care of the properties and make sure they “remain viable” and do not descend into disrepair. In addition, school security will be keeping an eye on them to insure that they don’t become magnets for crime.

The empty structures will also be available for rental to community organizations, according to the same rates and policies as any other school district property. Details on that are available on the district’s website.

0 thoughts on “Last Day of School at TT Minor & Mann”