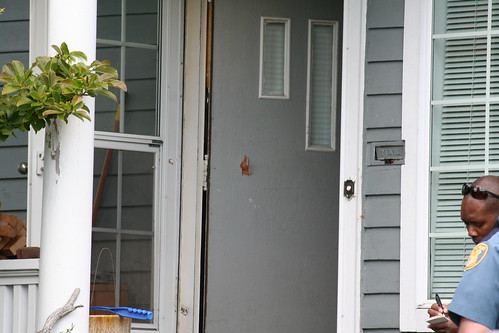 This morning I was able to speak with the victim in the home invasion burglary from Wednesday, who told me that the two women involved in the robbery are now under arrest. One was arrested here locally, and the other was arrested in Yakima.

Update: 2:20pm – Just heard back from SPD spokesman Mark Jamieson, who confirmed that both female suspects are in custody. He says that detectives developed some information that the suspects were headed towards eastern Washington, and were later notified by Yakima authorities that one of them had been arrested. She was booked into the King County Jail early this morning. The second was also arrested in Yakima a short time later, and is now with detectives en route back to Seattle where she will also be booked into KCJ. Both will be held on investigation of burglary and assault.

The victim said that his front door was open with the screen door unlatched, and the two armed women took advantage of that to walk in and demand “we’re here for the money”. The victim had no idea what they were talking about and ended up in a scuffle, during the course of which one of the guns discharged, taking a large chip out of the front door. The victim is now healing from the wounds he sustained in the assault: a black eye and a serious cut to his forehead that required a long row of stitches.

Yesterday the victim sent an email to neighbors explaining that since Wednesday he has learned that this was not a random event and not something that should keep people up at night in fear of a reoccurrence [ed. note: we’ve deleted a comment that republished that email to protected some personal details of the victim]. The crime was allegedly instigated by the man who was arrested by police shortly after the event. It turns out that he knows the victim and believed that the victim owed him money from a kitchen remodeling job eight years ago. The suspect reportedly now has a serious drug addiction and was using the claimed debt as a reason to send the two girls over to rob the victim and presumably use the proceeds to purchase drugs.

The male suspect was also convicted just this month of car theft in Snohomish County. Due to a lack of online records in the case, we’re unable to determine why he’s not still in jail for that crime.

The suspect and his two female accomplices is expected to be charged early next week. The seriousness of the crime and his list of prior convictions should get him some serious jail time. We’ll watch and let you know what happens.