Today just a bit after 2pm, a man in his 50s was alone in his home in the 500 block of 26th Ave when two gun-wielding women broke in and demanded money from him. A struggle ensued and the man sustained minor injuries when one of the women struck him with a gun. A weapon was also discharged during the scuffle, but no one was hit. The suspects then left the scene, running eastbound towards MLK. Police couldn’t say if any property was taken from the victim in the incident.

The suspects were described as two heavy-set white women, one with bleached hair and one with dark hair.

Police spokesman Mark Jamieson said that this appeared to be a random event, with no known connection between the victim and the suspects.

A silver dodge vehicle was also reported as possibly being connected to the incident, although a police spokesman couldn’t confirm that this afternoon. The vehicle’s plates are registered to a heavyset woman at an address in Yakima.

SWAT officers spotted that vehicle sitting empty at 27th & Jefferson not long after the robbery. Undercover officers observing the car later saw two white males get into the vehicle and drive away. They drove a few blocks and were pulled over by officers in the 700 block of 24th, in front of NOVA school.

The two male occupants of the car were removed, searched, and found to be carrying 9mm ammunition for a handgun. They were extensively questioned at the scene before being taken into custody and transported downtown for further interviews with robbery detectives. The suspect vehicle was impounded and towed away.

We have an unconfirmed report that they told police that they had dropped off two females in the area and were preparing to pick them back up. It’s not clear at this time how they might be connected to the suspects in the robbery.

Just after 2:00PM, a home in the 500 block of 26th Ave was victim of a home invasion robbery. Two women armed with handguns, fired several shots at the home with one round grazing the homeowner, and then stole some unknown items [ed. note: this is unconfirmed]. The victim’s injuries appear to be superficial and non-life threatening.

The suspects are described  as two white, heavy-set females in their 30s wearing jeans. One suspect has bleached hair and the other has dark hair. They were last seen running Eastbound toward MLK.

Police have setup a containment zone and are actively searching for the suspects.

We will provide more information as it comes in.

Update: by Scott – I just got back from the scene. Police were continuing their investigation, but no medics were there, which should be good news as far as injuries go.  A large dent was visible on the front door which might have been due to the gunfire in the incident.

Update 2:59PM: Police have been watching an unoccupied vehicle for some time that they believe is associated with the robbery. The car is a silver/grey Chrysler that is registered to a woman in Yakima who fits the descripition of one of the suspects. Two men got into the car and drove off. The car was stopped by police. One man admitted to dropping off two heavy-set women in the area, but doesn’t know where they are. Police have found .9mm shells on one of the suspects.

Update 3:30PM: by scott – Got back from the scene of the vehicle stop on 24th next to NOVA school. Police spent a lot of time searching the car and talking to the two male occupants. Eventually both were handcuffed and taken away in police cars for interviews with the robbery unit downtown.

Update 4:17pm: by scott – Police just held a media briefing about the robbery.  The overall facts are the same as we reported above. A man in his 50s was home alone when two heavy-set white women armed with handguns broke in and demanded money.  A struggle ensued, and the man was struck with one of the guns, sustaining minor injuries. A shot was also fired, possibly accidently, during the fracas. SPD spokesman Mark Jamieson couldn’t say whether anything was stolen, or how the two men arrested on 24th were connected to the incident.

Police were still at the scene conducting an investigation, including some staff in CSI t-shirts.

Also, the suspect vehicle was being towed away from the place where it was stopped on 24th.

We’ve got video coming soon of a police briefing about the incident. 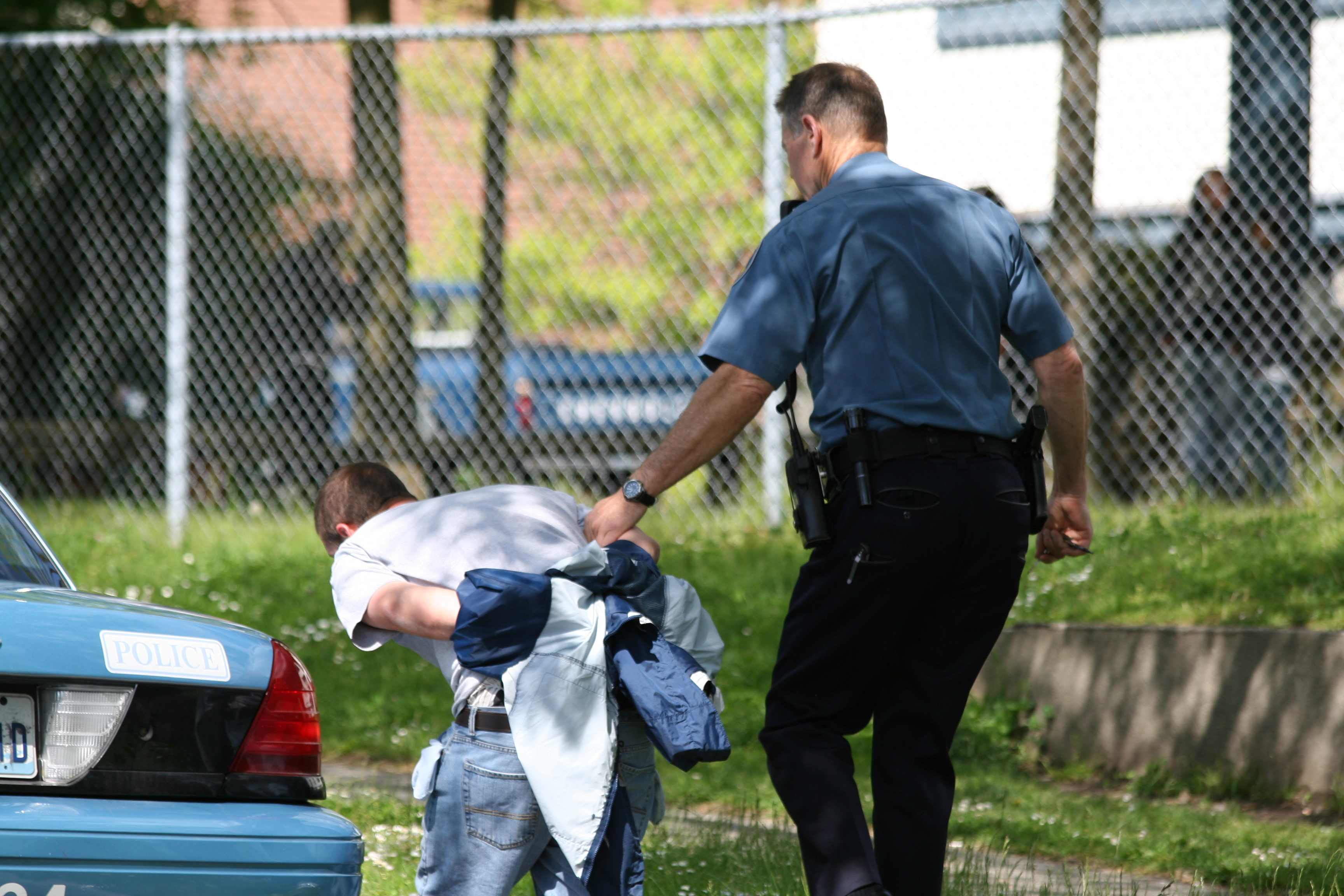 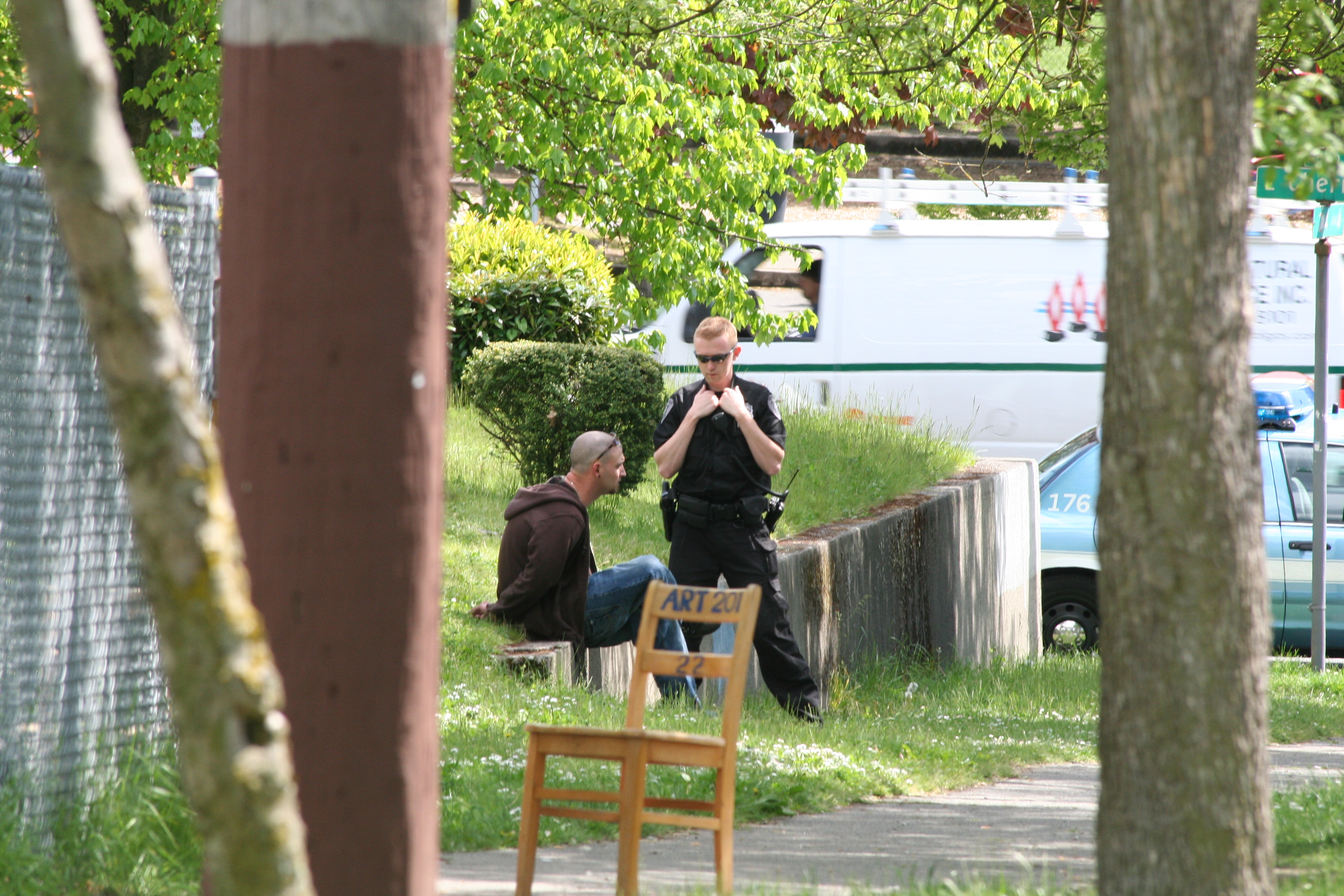 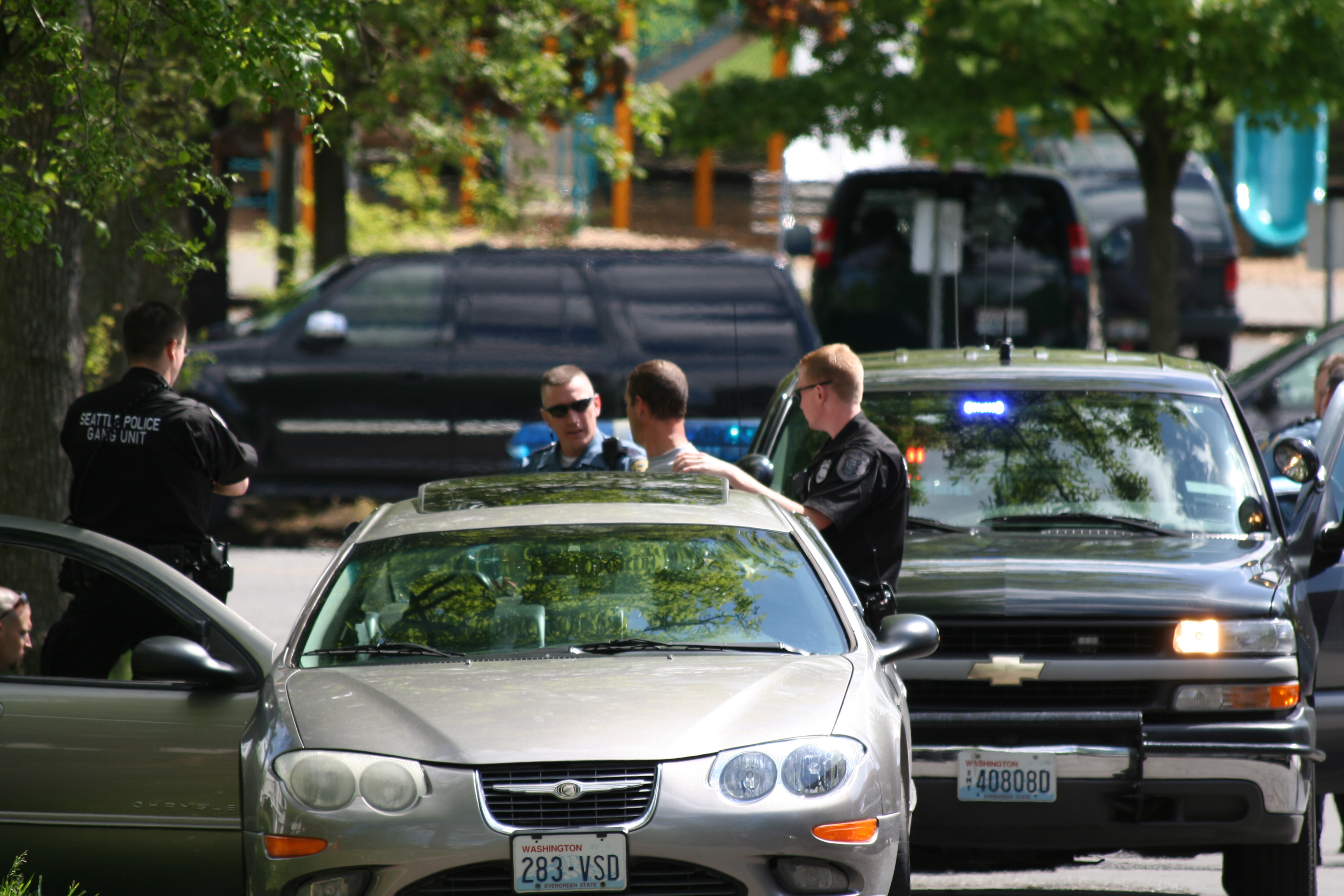 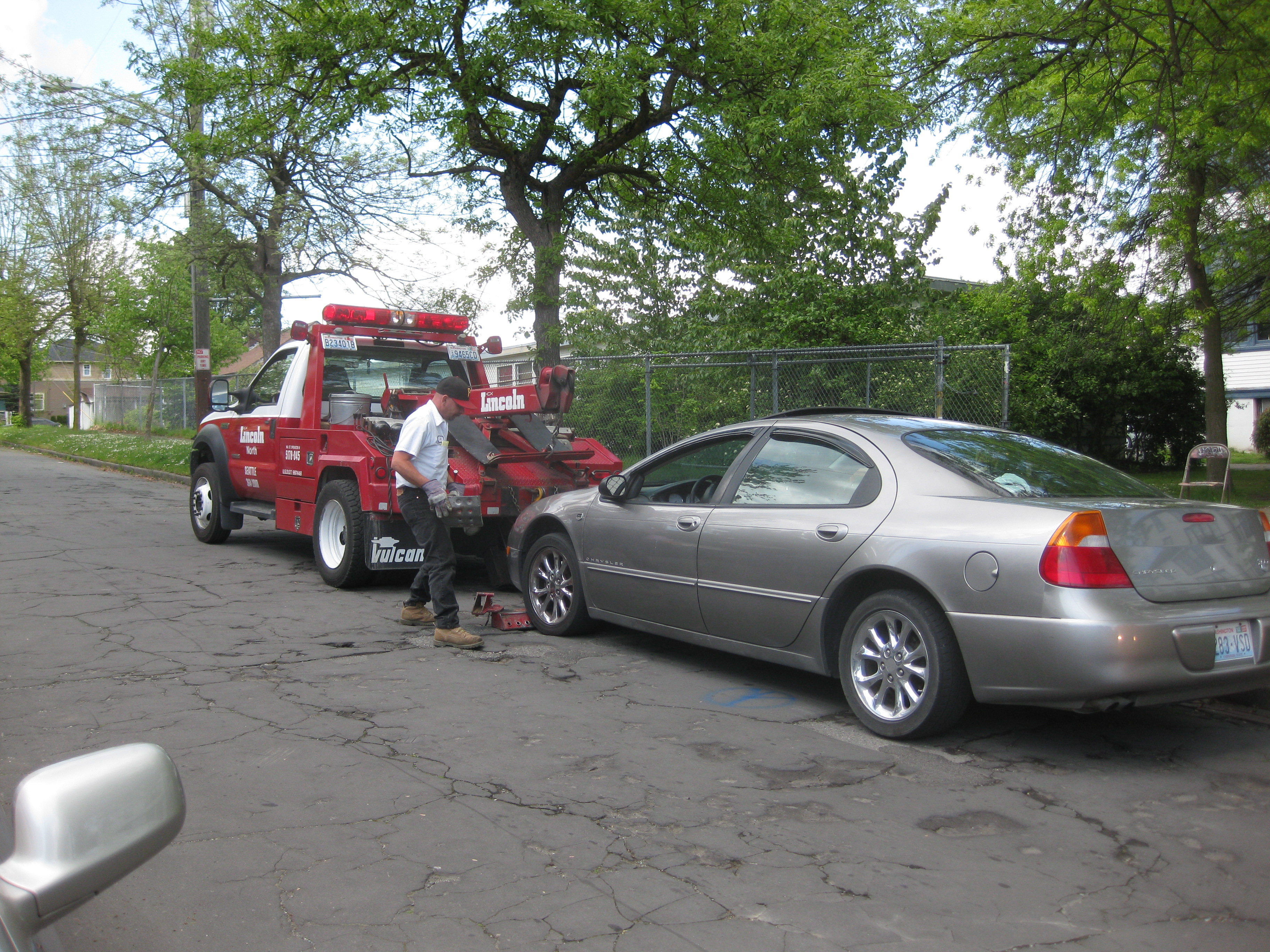 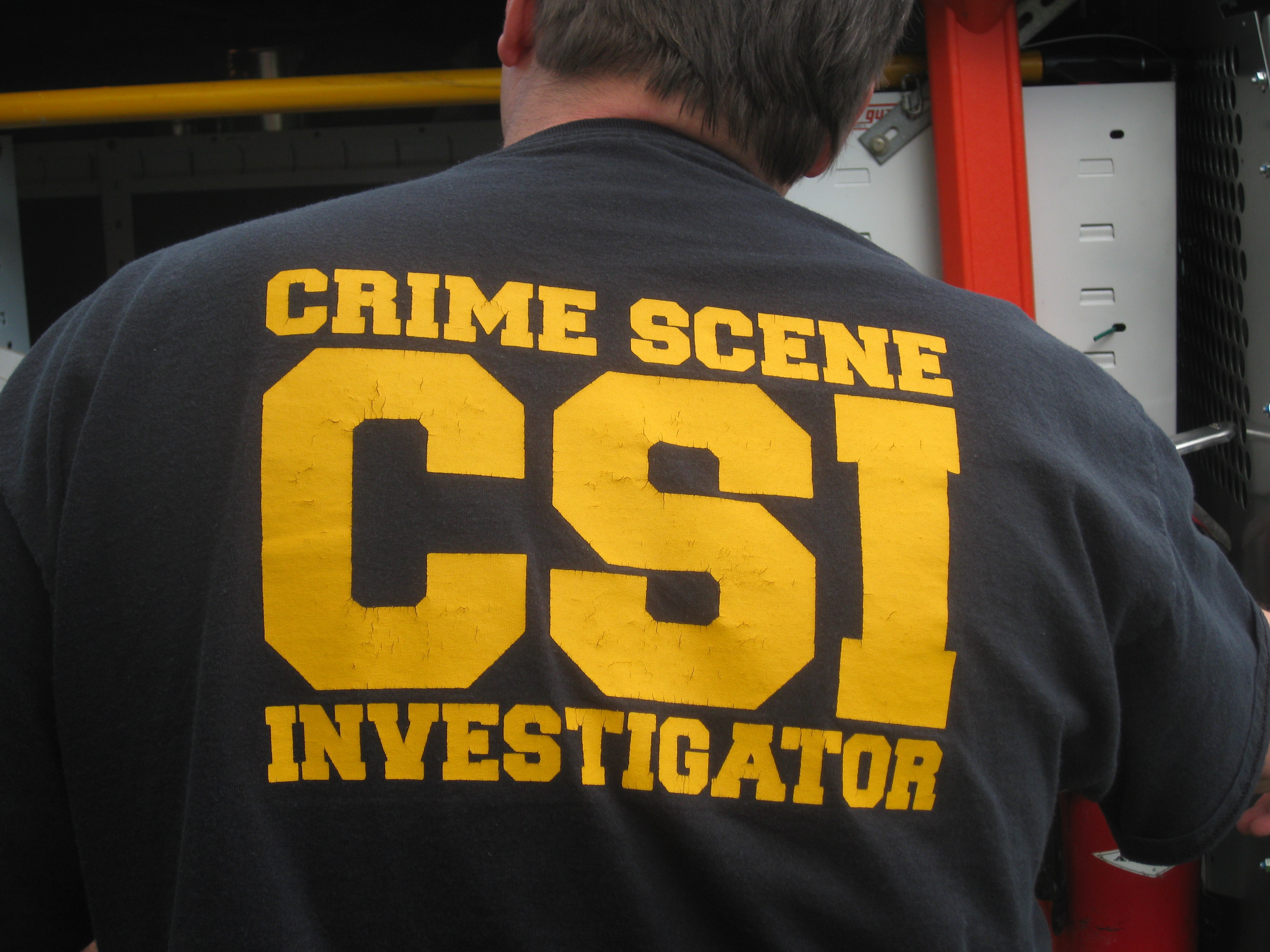 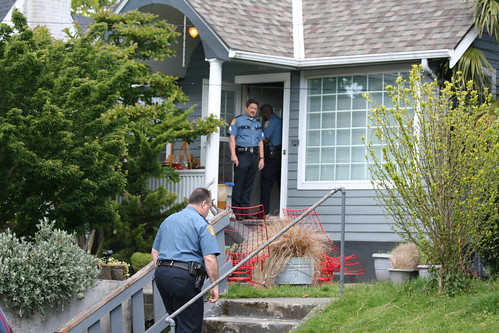 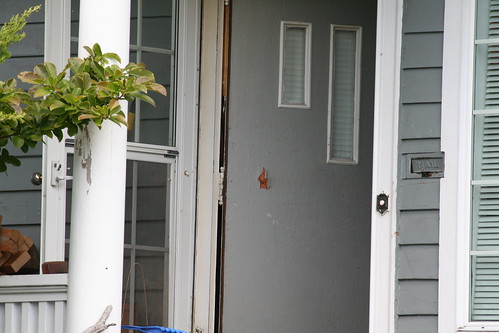 0 thoughts on “Home Invasion Robbery at 26th and Cherry – Updated”