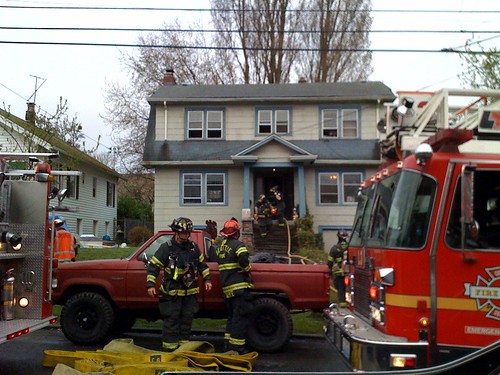 I’m at the scene of a house fire on 26th Ave. Firefighters have put the fire out, which neighbors tell me was started by a stove that was left on.

All of the human inhabitants are safe, but a search is underway for two cats who may have sought shelter upstairs.

There was good deal of smoke which you could smell from several blocks away.

Update: All members of the home are safe and accounted for, including the cats.

The homeowner said that they had turned on the stove to cook breakfast, but evidently turned on the wrong burner, igniting something that was sitting on or near the stove. A foam rubber knife block next to the stove was a major accelerant, sending flames up into the cabinets and along the walls.

The kitchen was very badly damaged, with soot and smoke damage everywhere, and a wall that was ripped open by firefighters. Here’s a photo of the damage:

Firefighters had dumped the stove out into the back yard:

The homeowner’s mother was in town for a visit and said that the fire experience was a bit more excitement than she was looking for. She had sprung into action and tried to use a fire extinguisher to put out the fire, but it was a different model than she was accustomed to and they couldn’t get it to spray. Their advice to readers is that you have an extinguisher close at hand and make sure you’re completely familiar with how to use it in an emergency.

Firefighters said that the homeowner’s next step is to get the insurance company involved. They’ll take care of repairs to the kitchen, and will bring out cleaning crews to rid the rest of the house of smoke damage. Anything that can’t be cleaned will be replaced.

Until then, the residents have received multiple offers from friends and neighbors for a place to stay.