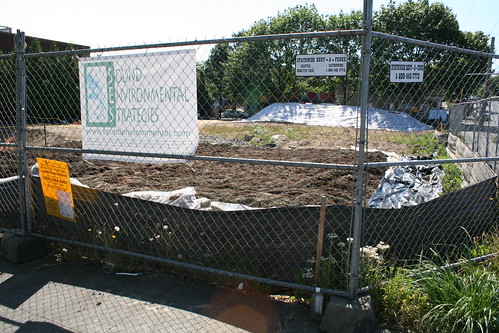 For the most part, the Central District has only ever been two things:  an old growth forest and a residential neighborhood. Never having had a real industrial presence, you wouldn’t expect to see too many issues with serious pollution or toxic cleanup. But a review of State Department of Ecology data shows that we’ve got our share of problems spread around the area.

The biggest culprits are from two sources: dry cleaners and gas stations or other fueling depots. State environmental rules require reporting and remediation whenever toxic or other volatile compounds end up in the ground, water, or air. That has resulted in 36 different reports filed in the last 10 years in various locations around the Central District and the northern part of Capitol Hill.

The good news is that most property owners appear to be very responsive when a problem is found. Of those 36 reported sites, 11 have already been cleaned up and another 15 are in the active stages of a remediation process. Another 5 are in various stages of analysis to determine the level of risk.

But a total of 5 different sites fall into a more worrisome category where a serious pollution problem has been discovered and analyzed, but where no concrete action is being taken to clean it up. And two of those 5 are given the second most serious pollution ranking by the state Department of Ecology.

Another seriously contaminated site is at Metal Laundry Inc at 614 12th Ave, which was given a ranking of 2 out of 5 due to petroleum product and solvent contamination of the soil and groundwater. Reported in 1999, it is listed as being under active remediation.

As for where else you might find a problem, just look for a gas station or dry cleaners. We found that the majority of each of those businesses in the area have appeared on the ecology reports at some time over the last ten years. Luckily, the majority are either resolved or on their way to becoming so.

And this is one area where you can make a difference by generally avoiding dry cleaning, and when you must get a garment professionally cleaned, look for one that doesn’t use the toxic old PERC chemicals. CO2 is a popular new option that is available at some places around town.

Finally, based on what we’ve read in these ecology reports, we’d advise everyone to refrain from drinking any groundwater from anywhere in the city.