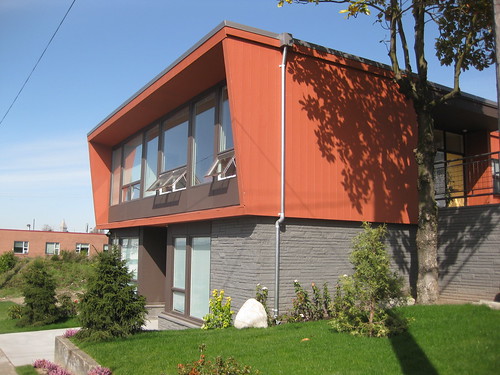 CASA Latina is now completely up and going at their new location at 17th & Jackson, including their day laborer support services. And so far things appear to be going very smoothly, with no sign of the issues that had been predicted by the opponents of the organization’s move into the neighborhood.

The big fear was that the area would become like the Home Depot parking lot, with people hanging out on the streets at all hours waiting to be picked up for jobs. But on our tour past the site this morning, we saw no sign of that. The organization’s offices were very busy inside, with a large class in session and a variety of people waiting inside. But all of the activities were confined to the property, with nothing spilling out onto neighboring streets.

In the morning, a man stood on the corner of 17th and Jackson (in front of our building) and started waving at cars, not flagging them down as day laborers do, but waving at them as if he were paid to wave at cars for a grand opening. The goodwill ambassadors went over to talk to him and ask him what he was doing. He said that he was here because he was part of Casa Latina. They invited him inside, but he refused to come inside. He said that he had been part of Casa Latina for a long time (although no one – neither day laborers nor staff—recognized him). The goodwill ambassadors told him that he couldn’t stand on the sidewalk waving at cars but he refused to stop. We then called the police. Sgt Miles and Officer Knox came out and talked to him and told him that he couldn’t continue to wave at cars and finally got him to stop.

Ms. Stern also mentions some protestors who have been at the site at various times, but we saw no sign of them around this morning.

0 thoughts on “CASA Latina All Moved In – No Issues Yet”