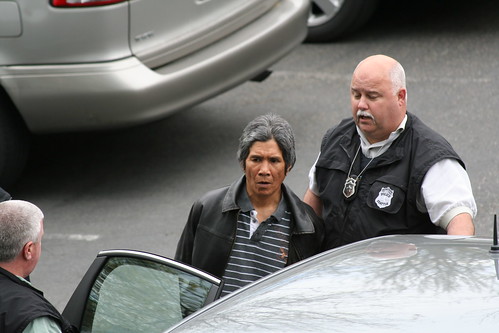 The suspect in a bank robbery this morning on First Hill was caught by Seattle Police just after lunch time today in the Seattle Vocational Institute parking lot in the 2100 block of S. Main.

It appears to be the same suspect pictured in surveillance photos in a Capitol Hill bank robbery that occurred over the weekend.

A Seattle Police official told me that officers from the East Precinct had been conducting an area search in a southeasterly direction from this morning’s robbery at the Banner Bank at Boylston & Madison. The suspect was spotted on foot by patrol officers near SVI and was soon identified as the robbery suspect.

FBI agents were on the scene searching the suspect and taking him into custody.

It appears that the suspect performed a wardrobe change at some point during his escape. The description given by bank staff had him wearing a khaki jacket and with medium length black hair. At the time of his arrest he was wearing a black leather jacket and what is assumed to be his native graying hair.

SPD officials couldn’t release any additional details about this morning’s robbery, but one police source said that based on the suspect description it was likely to be the same man wanted in a robbery at the 15th & E. John Wells Fargo on Saturday April 25th. In that case he entered the bank inside Safeway and passed a note that implied he had a weapon. The teller gave him an undisclosed amount of cash and he was able to flee the scene before officers arrived.

Update: SPD spokesman Mark Jamieson says that they have confirmed that today’s suspect is the same as the one from Saturday’s burglary on Capitol Hill. The suspect, Ricardo Calvin Perez, was booked into King County Jail at 4:37pm today for investigation of robbery. A search of public records shows that he has a felony conviction in a 2005 burglary case, and a number of other misdemeanor convictions for theft.

Additionally, Officer Jamieson says that today’s robbery was “very similar to Saturday’s crime”, where he passed a note implying he had a weapon and walked away with cash from the teller. 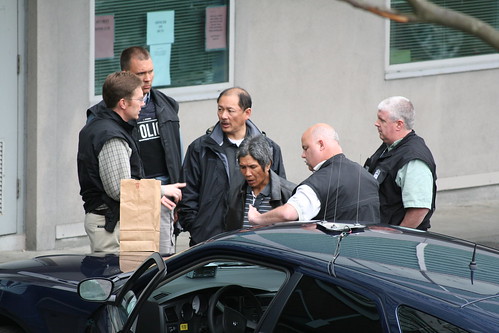 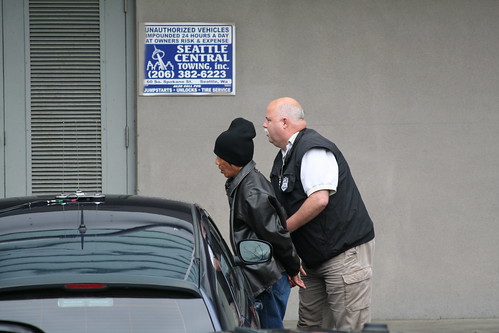 0 thoughts on “Bank Robbery Suspect Caught in the CD – Updated”