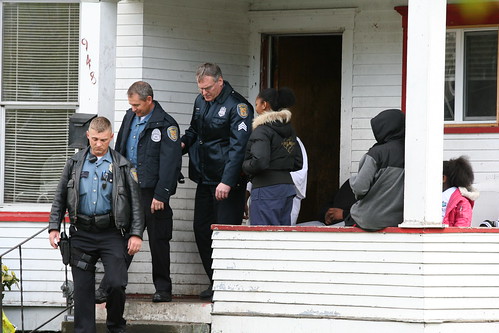 This morning a man who matched the description of a suspect in an armed robbery was able to avoid capture by running into a home. Police gained entry to the house after a brief stand-off, but then failed to find the suspect in the home after a lengthy search.

It all started near the NOVA school at 26th & Cherry when two men approached a student, displayed a stainless steel handgun, and demanded some personal property from the victim. The gun-wielding suspect was described as an 18-20 year old black male, 5’10”, 160 lbs, wearing a red t-shirt.

Police conducted an area search and spotted a suspect matching that description at 27th & Spring. But that suspect ran into a house on the corner of that block and refused commands to come back out. Eventually the other occupants of the house opened the front door and officers were able to search the home but came up empty.

It’s a big mystery how the suspect eluded capture. Although police arrived quickly, it’s possible that he was able to escape the house through a different door before police were able to completely surround the property.

Attentive readers will note that this isn’t the first issue around 27th & Spring. I’ve talked to a number of different neighbors over the last year who have been endlessly frustrated by the criminal activity that they say flows out of three different homes on that block. In addition to nuisances such as fights and other noise, one neighbor has told me that the residents of these homes “rob everyone around here” and have repeatedly burglarized neighbors in the area. It’s gone so far as to drive a few people to sell or rent their homes and move away.

The home in question today is owned by elderly grandparents who have a large extended family that lives with them. For their part, they feel picked on by police. A relative of the homeowners who was at the scene today told me that they feel like police unnecessarily target that home, blaming them for crimes that they’re not responsible for. Residents of the home also expressed alarm that police entered and searched the home today without having any warrants, and worried about the impact that the stress of an armed police search could have on some of the elderly residents there. (note: generally the hot pursuit doctrine allows police to enter a residence without a warrant if they’re in pursuit of a suspect in a crime)

At a public meeting last fall, a resident of a different property on that block spoke about his children who live with him, and acknowledged that they have caused some problems for neighbors. But he implored other meeting attendees to work with him to straighten things out and not do anything to force him out of his home, which has been in his family for many years.

There’s no clear cut path for what neighbors can do when confronted with persistent criminal issues on specific properties. A first step is to make contact with the Community Policing Team who are dedicated to work on long-term issues in the East Precinct. I know that they have been involved in the issues of this block, but apparently so far without significant success. The Seattle Neighborhood Group also provides a “Take Action Program” that provides assistance to residents to help them take up private legal action against problem properties.