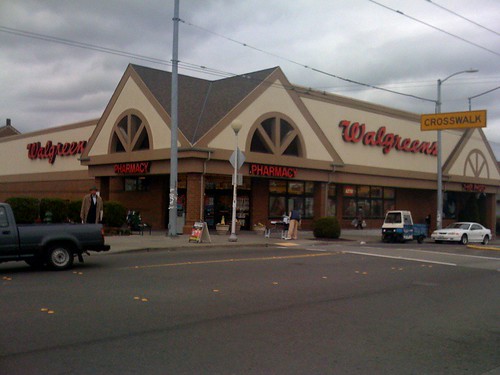 While at the Capitol Hill Bartells on Saturday, we saw a little sign saying that they would no longer be accepting new Medicaid customers due to state budget cuts. And now we just received a news report saying that Walgreens was pulling almost half of its Washington State pharmacies out of the Medicaid program all together.

The Walgreens at 24th & Jackson is apparently on that list, which will force any Medicaid patients in the neighborhood to look elsewhere for their prescriptions.

A statement on the company’s website says that new state reimbursement rules “will significantly reduce the price it will pay for brand name medications, severely impacting the economic viability of doing business in Washington.” The rules aim to drive patients towards less expensive generic drugs to save money during the state’s multi-billion dollar budget crisis.

So without Walgreen’s & Bartells, where do you have left to get a prescription filled?  We called Safeway at 22nd & Madison, and they confirmed that they are taking new Medicaid patients and have no plans to stop doing so. Definitely a hike for people on the south end of the neighborhood, but it looks like the only reasonable option for now.

0 thoughts on “Walgreens Says: No More Medicaid Rx for You”