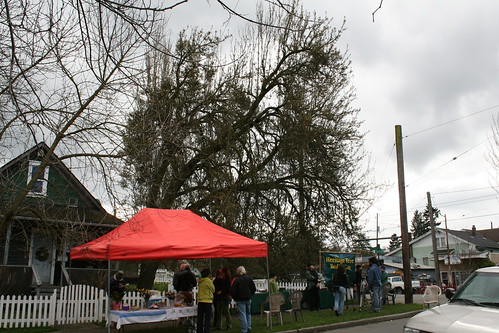 The Central District has been home to a variety of famous people, such as Jimi Hendrix and Quincy Jones. Now we can add another famous resident to our list:  the 27th & Cherry Heritage Pear Tree.  It was dedicated this morning in a ceremony where a new stone marker was unveiled and where a large group of neighbors enjoyed pear slices and cider under the tree’s canopy.

The tree won its heritage status due to its unusually large size for a fruit-bearing tree, and was described as “The largest and most impressive pear tree in Seattle,” by  City Arborist Nolan Rundquist.  Most fruit trees end up being pruned repeatedly and never reach such a size. Tom Samuelson, who owns the property the tree sits on, says that the oldest picture they have of the tree is from a tax record in 1937, when the tree was smaller but still of a substantial size. Arborists estimate that the tree is at least one-hundred years old, likely planted when the neighborhood was first developed in the late 1890s and early 1900s.

Mr. Samuelson nominated the tree to the heritage program to inject a bit of good news and neighborhood pride into a spot that is less than one hundred feet away from where Tyrone Love was murdered just a month ago. The top of the new stone marker on the corner next to the tree is inscribed with “All You Need Is Love” in reference to that event.

Although our recent cool weather prevented the tree from being in bloom in time for the ceremony, it should start sprouting white flowers within the next few weeks. The owner said it produces hundreds of pounds of fruit each summer, and invited everyone in the neighborhood to stop by and enjoy the fruit when it does.

You can find out more about the Heritage Tree program at the city’s website. If you’ve got a tree that you’re particularly fond of and that you think would be worthy of consideration, there’s a handy online nomination form. The key factors for acceptance into the program include the tree’s size, age, rarity, and history. 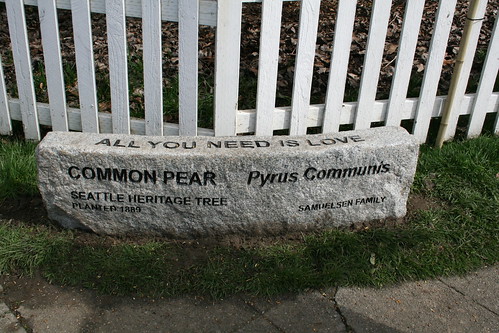 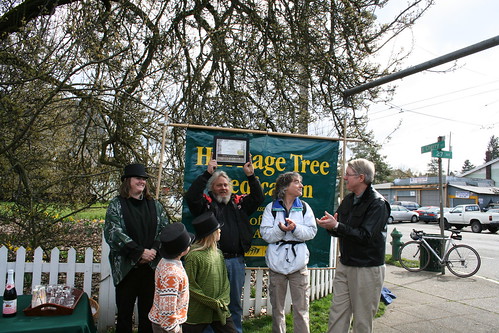 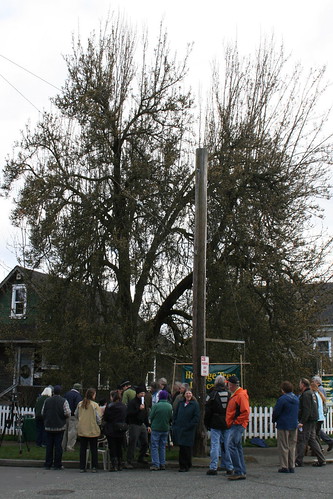 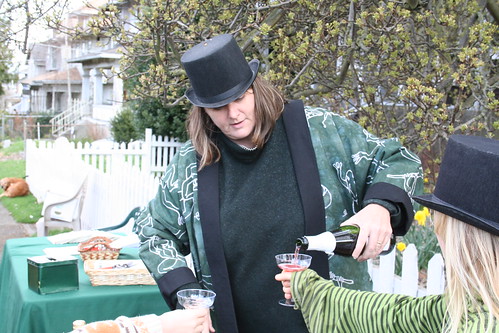