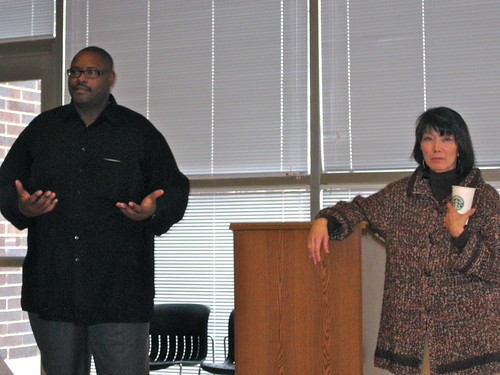 If there was one good thing to come out of today’s 37th District Town Hall, it was that it showed that a lot of people are concerned and trying to get involved in the budget woes the state is facing.  The large back room of the Garfield Community Center was standing-room-only, with well over 150 people in attendance.  State Representative Sharon Tomiko-Santos said that it was the largest crowd she’d seen in her eleven years in that job.

The big issue of discussion was the $8.5 billion shortfall in the current state budget, an amount that is almost 19% of the total planned expenditures.   For an example of how big that is, you could cut half of all health, public safety, prison, and social services funding and still be short of cash. That means big cuts to a whole variety of services that are very important to people here in the Central District.

A number of speakers made impassioned pleas for the programs that are important to them and their families. One woman described herself as a former drug addict who only ten months ago was out on the streets smoking crack. But state funding for long-term in-patient treatment got her clean. Now she can take care of her daughter again and hold a job.  She said “If I did not have option of the long-term treatment center, I wouldn’t have daughter, and I wouldn’t be employable. Treatment really works, and it needs to be there in the community.”  But that kind of focused treatment is expensive, and it is on the chopping block along with all of the other funding that doesn’t directly support primary and secondary education.

Others spoke out about potential cuts to adult day care services, with one man saying that a few years ago his elderly mother was unable to take care of herself. But her participation in state funded adult day care has drastically improved her quality of life and helped her become more self-sufficient. It’s even enabled her to start volunteering her time back in the community.  And the alternative for a lot of these people if they don’t get this kind of proactive help?  They’ll end up in state-funded nursing homes, at a much higher long-term cost to the taxpayer.

Members of the crowd implored representatives Pettigrew and Tomiko-Santos to look at the revenue side instead of forcing through these kinds of drastic cuts. Eliminating corporate tax deductions were thrown out as an option, but Representative Pettigrew said that the big items in that list are things that they wouldn’t want to change, such as tax breaks for public hospitals.  There was also a lot of support for an income tax among town hall attendees, but the path to that is long and unlikely.  It would take an amendment to the state constitution, which requires 2/3 vote of both legislative chambers and a majority approval of the state’s voters.

There’s going to be a lot of people directly hurt if these kinds of cuts go through.  And those of us that aren’t directly affected will feel the pain when this wide variety of social issues go untreated in the community.