At just after five o’clock, four shots were fired at a moving vehicle from a man on foot behind Starbucks.

According to police, there were no injuries, but several rounds hit the vehicle and the Washington Mutual building across the street.

The gunman fled Eastbound behind the Walgreens, while the vehicle, a gray Cadillac sedan, fled Southbound on 23rd Ave.  Witnesses described the shooter as a black male, late teens to early 20s, in a white striped jacked.

Witnesses on the scene were able to get the license plate of the vehicle, and police located it in front of its registered residence. The driver and several passengers were found inside the residence and are currently being questioned by police.

The suspect has not been located at this time.

Update: by Scott – I just got back from the scene and spoke to witnesses at Starbucks who saw the whole thing happen.  They described seeing a man walking through the Starbucks parking lot with a gun, and seeing him open fire on the gray Cadillac that was waiting on Jackson at the light at the intersection with 23rd.  He even jumped up on the concrete retaining wall to get a better angle on his target.

Another witness I spoke to was in the WAMU branch bank on the opposite corner of the intersection when they heard the sound of the gunfire, and could hear rounds striking the building.  People were standing at the bus stop right outside there in the line of fire, and the gunshots sent them ducking for cover.  I walked over there and got a photo of where a bullet had struck one of the red poles that supports the cover above the sidewalk. 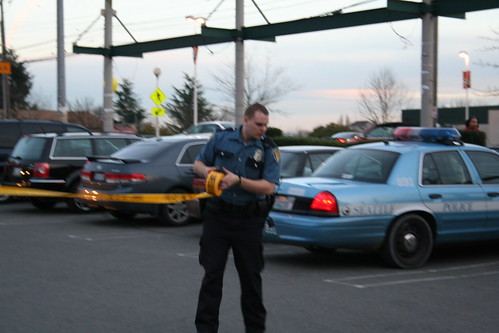 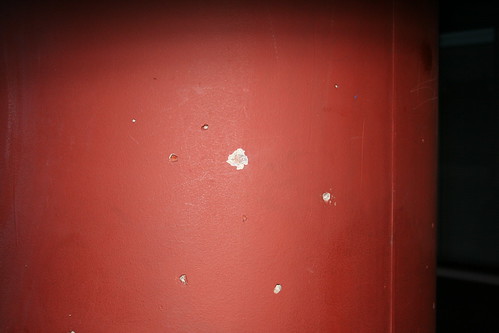 0 thoughts on “Shots fired at 23rd and Jackson – Updated”