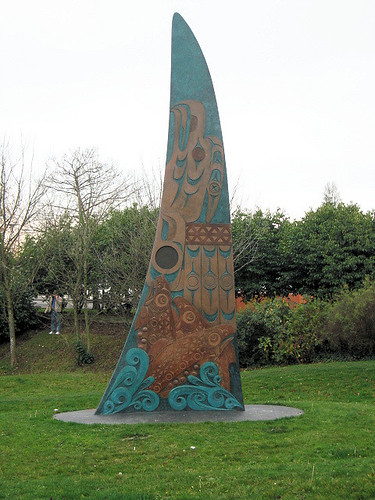 About ten years ago neighborhood residents began urging King County to develop the parking lot area north of the Youth Services Center on 12th Avenue for uses providing some vitality to the neighborhood. In 2004 King County Councilmember Larry Gossett helped bring about funding for a master planning effort for the entire Youth Services Center site. The design firm of Arai Jackson led a series of public meetings attended by dozens of neighborhood and County stakeholders. That effort produced a concept plan for replacement and expansion of County courtroom and office buildings, development of housing and retail space along 12th Avenue, and preservation of the Marvin Oliver artwork at the northeast corner of the site. (The artwork, “Spirit of Our Youth” consists of the bronze whale fin and surrounding earthworks. See http://www.marvinoliver.com/Bronze/fins_totem_poles/index.ht )
In order to support future development, the City upzoned a portion of the site to allow greater height at the northwest portion along 12th Avenue to 65 feet while keeping the lower L3 zone height limit on the east and south portion of the site.

However, the publication of the Arai Jackson concept plan in 2005 did not result in further action. The County postponed work on developing the site while assessing the need for additional courtroom and office space. Now that assessment has been completed and the County would like to demolish the existing Alder Tower (the tallest building on the site) and attached Alder Wing, and replace those buildings with a new larger structure with more courtrooms and office space. (The new County court and office space would be up to 250,000 square feet, several times the size of the Alder Tower and Alder Wing.) The existing detention facility at the southwest part of the site would remain mostly unchanged.

The County is seeking developers interested in the development of the remainder of the site north as a mixed-use project which may include affordable and market-rate housing and retail and commercial space. Parking, now entirely in a surface lot, could be located in a structure. The Arai Jackson concept saw the parking underground, but the County has not ruled out any particular parking option.
The method and source of financing the County portion of the development, as well as a timeline, have not yet been determined. It’s likely that funding will require a bond or levy. Because of the poor and overcrowded condition of the current facilities, the County Executive sees this as a high priority capital project.

The County has given no public estimate of the range of housing units and retail space that could be built on the site, but the potential change to this stretch of 12th Avenue is significant. The total size of the site is 8.6 acres, although there’s no expectation that the portion occupied by the detention center would be redeveloped. At the several public meetings in 2004 most neighborhood residents were supportive of development that was sensitive to the neighborhood and resulted in neighborhood services. County officials have professed no interest in repeating the brutal anti-urban, street-destroying development represented by the current Youth Services Facility.
Oddly enough, those working on planning the project to this point have not given much attention to the issue of public transportation improvements. There’s no public transportation on 12th Avenue and the County provides free parking to most of its employees at the current Youth Services site. The County apparently is not required to participate in programs to reduce single-occupancy-vehicle commute trips as are other large employers.

Preservation of the Spirit of Our Youth artwork was a particular focus of neighborhood residents during the 2004 round of public meetings. Because the bronze whale fin and much of the surrounding site constitute a work of public art there are some safeguards, although moving the work to some other location may not be out of the question. The County’s RFQ is ambivalent about that.
The King County Facilities Web site shows that seven developers responded to the RFQ (Request for Qualifications) indicating interest in working on the site. http://procurement.kingcounty.gov/procurement_OVR/detail.asp

In mid-January the County expects to review and assess the list of developers who responded. 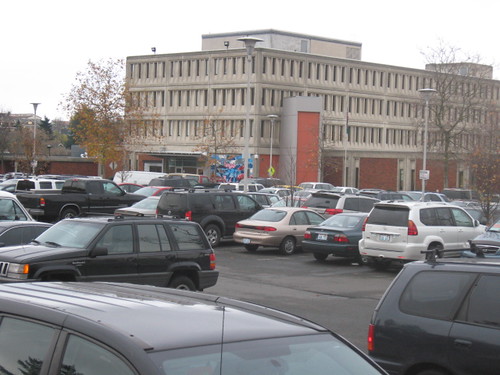 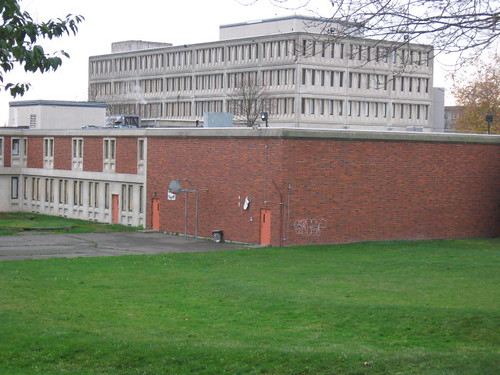