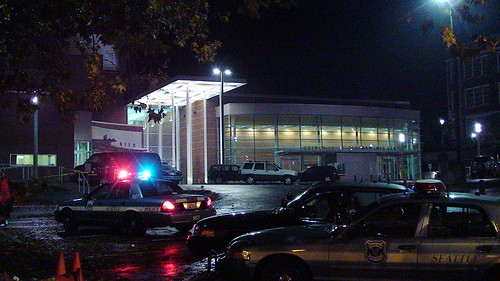 Tonight at a few minutes before 8:30pm, two boys aged 16-18 were shot just north of the intersection at 25th & Jefferson. One collapsed at the scene and was later pronounced dead.   The second was hit twice but was able to make his way to the Garfield gym where a Halloween event was being held.  He was taken to Harborview for further treatment, but his current situation is not known.

Police stress that neither the victims nor the shooters had any connection to Garfield or the event that was being held there.

The initial 911 calls reported hearing shots fired in the area around Garfield.  Later calls reported multiple victims, with one in the Garfield gym and another initially reported as being on the roof of the Medgar Evers pool.   It was several minutes before the 2nd victim was located at the original scene of the shooting.

There were multiple witnesses to the crime who were being interviewed by police.   But as of tonight, police officials did not have any descriptions of possible suspects. We did hear that police were interested in talking to a possible witness who was associated with a white 4-door vehicle that is registered to an address in the 700 block of 20th Ave, but Assistant Chief Metz was unable to confirm that or provide any further details.

On October 31st at approximately 8:30 pm, officers responded to a call of shots fired and someone down at Garfield High School Teen Center. Officers quickly arrived in the area and found two victims.  A male, 15-years-old was contacted in the gym with a gun shot wound to the torso. A second victim, a 16-year-old male was found on the stairs in the back leading to 25th Avenue. The second victim was unresponsive. Both victims were transported to an area hospital by Seattle Fire,  where the second victim was pronounced dead. The first victim was in stable condition but uncooperative. The suspect(s) were gone upon officers arrival and the investigation continues.  Homicide, CSI and Gang units responded and processed scene.

Detectives determined that this incident occurred just East of the Garfield Teen Center, on 25 avenue near Cherry Street. The victim, after being shot, made his way to the teen center seeking assistance.

The live log of the event is shown below:

Police are responding to several calls of shots fired somewhere between the community center at 23rd & Cherry & Garfield.

911 operators have gotten calls from someone reporting injuries, but there’s too much screaming to get more information.

There’s a complainant near Ezells, and varying reports of victims either on top of Medgar Evers pool or locked inside the Garfield gym.

Update: Police found one guy in the gym with 2 gunshot wounds.  911 operators are reporting a second victim between the gym and the pool

Update x4: 8:38 Call received saying a suspicious man at 28th and Jefferson Jackson is hiding in the bushes saying that someone is dead. There are blood trails in the area.

Update x7: I just got back from the scene.  The victims had already been taken to Harborview.   There were police looking for evidence in the street just north of the intersection at 25th & Jefferson.   There was a large crowd of distraught high-school-aged kids in the area, with one girl crying, yelling “They killed [name].   They just killed him”.

Update x8: Officer reporting blood found at 28th & Jackson.  Seems like they think its related, but unclear how. (note: this ended up being unconnected, and possibly due to a bloody nose)

Update x9: Going to a media briefing.  Back with more sometime after 10pm

Update x10: Just got back from the press conference.  There were two victims, aged 16-18, and both were shot on 25th just a bit north of the intersection at Jefferson.  One victim collapsed at the scene and later passed away.  The second was shot twice but managed to make their way back to the Garfield gym to seek assistance.  Police currently have no description or other information on the assailants.   Additionally, although Asst. Chief Metz said that both victims were known to police, he said it was too early to pin this specifically on gang or drug activity.  But he took considerable pains to stress that neither the victims nor the suspects had any ties to Garfield or the event that was being held on campus this evening.

Update x11: Two videos added.  The first is very rough raw footage from the initial scene on 25th.   There’s a lot of emotion and some initial anger at the sight of my camera.   The second is video from the police press conference with Assistant Chief Metz.

68 thoughts on “One Killed, One Injured in Shooting Near Garfield”