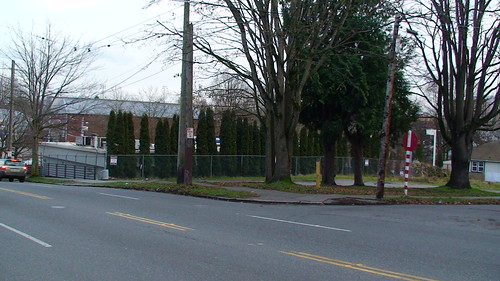 Gunfire erupted from a vehicle in the intersection of 22nd & Cherry overnight, injuring a man who was standing across the street.

Police responded and found a victim with two gunshot wounds near the AM/PM.   He was described as a white male, 40, walking around alert and conscious.  Medics responded to the scene and treated the victim for about 20 minutes before taking him to Haborview for further attention.  His current condition is unknown.

The victim was apparently standing in the vacant gravel lot behind the AM/PM with a small group of other people when unknown suspects in a silver 4-door sedan, possibly a 2006 Dodge Charger or Stratus, opened fire from the adjacent intersection at 22nd & Cherry.   The vehicle had silver-tinted windows and was occupied by 4 people.  It was last seen driving northbound on 22nd from the scene.

Police recovered multiple shell casings from the intersection and closed Cherry to traffic for about an hour while the investigation continued.

The victim was associated with a “$70,000-$80,000 Audi” that was found sitting a few blocks away at 21st & James with an engine that was still warm. The vehicle was impounded by police as part of the investigation.   Police also found a crack pipe in the victim’s possessions, and he has an active file with the state Department of Corrections, indicating a recent parole or probation.

Police also reported speaking to two additional victims in the area who were shot at but escaped without injury. They were described as gang members and were said to be uncooperative with the investigation.

Update: Here’s some additional information from SPD’s blog, including a description of the victim as uncooperative:

On 10/30/08 at approximately 12:45 AM, several pedestrians were in the area of 22 & Cherry when a car, occupied by three individuals drove by and began shooting at the pedestrians. Approximately 10 shots were fired and one pedestrian was hit He, along with another person, ran to a business on the corner of 23rd & Cherry for safety. Officers responded and began investigating the incident. Neither were very cooperative. The male sustained two gunshot wounds and was transported to HMC. Officers cordoned off the area around the scene and located spent shell casings at 22nd & Cherry. Gang detectives responded and processed the scene in conjunction with patrol.