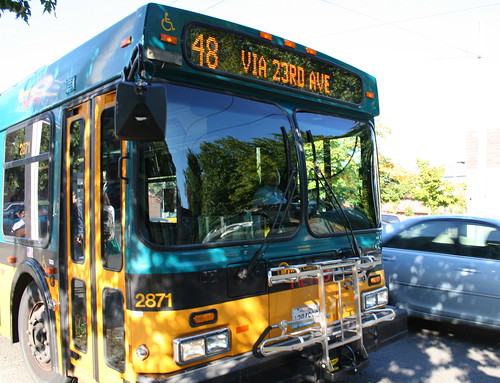 There’s good news for riders of the #3 & #4 bus routes between the neighborhood and downtown.   Metro is partnering with the city to increase the frequency of service by about 30% during off-peak hours, with buses running every 6-8 minutes from 9am to 3pm and 6:30pm to 10pm on weekdays.   That’s more frequent service than during the peak commuting hours, and compares to the current schedule of 10-12 minutes during those same time periods.

Service will also improve on the #14 route between Mt. Baker & downtown, with peak-period service increasing to every 15 minutes vs. 18-20 minutes currently. (thx Elvis for catching this one)

Service on route 27 down Yesler will be decreased a bit, losing the current 6:50pm trip from Colman Park to downtown.

All changes take affect September 20th, and a full list of changes is available at  http://transit.metrokc.gov/up/sc/rideralert/ra-092008-rtchan .