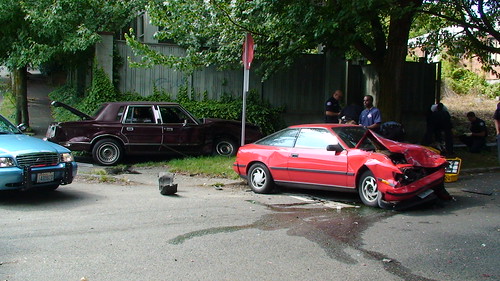 I was out walking the dog, on my way back from getting a picture for another story, when I heard a loud crash a couple of blocks away.  We headed that direction and found a two-vehicle accident at the corner of 20th & Cherry.

A witness who lives about a block south said that he saw the maroon 4-door going northbound on 20th at “about 90 miles an hour.”  He yelled at the vehicle as it passed, and then heard the crash as it blew the stop sign on Cherry and struck a red Toyota.   It wasn’t immediately clear which way the Toyota was traveling.

Another witness who lives on the corner heard the crash and looked outside in time to see the red vehicle spinning across the intersection and the maroon car come to a rest on the sidewalk.  They said that several other bystanders witnessed the entire event but left once it became clear that police would be arriving.

Both drivers appeared to be injured.  The driver of the maroon car was sitting on the curb when I arrived, and was being placed onto a back brace by medics as I left.   The driver of the red car hadn’t yet been removed from that vehicle.

There was also a third man lying on the ground and receiving medical attention.  The first witness I spoke to said that this man was a pedestrian who was struck in the accident.  But other witnesses said he was in the area but not actually hit, and decided to make himself a part of the scene in hopes of an insurance payout.   I did notice that there was a fourth man watching on as the third was first being treated by medics, but he then left the scene when the first police officer arrived.

All three individuals are being transported to Harborview.

Neighbors said that high speed vehicles coming down the hill on Cherry and on 20th were a persistent problem, and that this would be the last straw that would motivate them to lobby the city for new traffic controls at that intersection, specifically mentioning a stop sign for Cherry or a stop light. 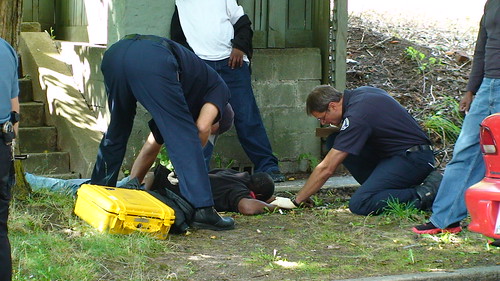 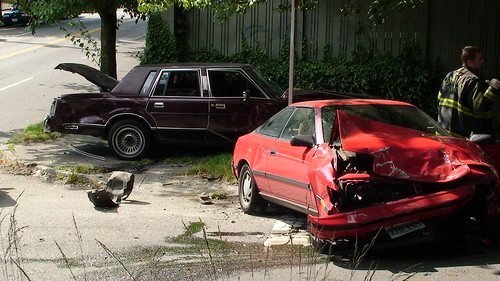