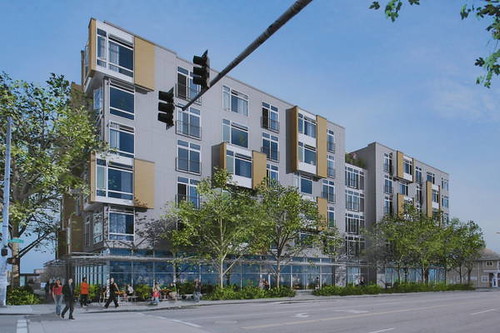 We spent part of the morning here tuned in to the live stream of the city council’s Land Use and Planning Committee, where the 23rd & Union rezone was a part of the agenda.   The result should be good news for developer Jim Mueller and neighborhood supporters of the project, as it was approved on a vote of 2-0 and forwarded to the full council for consideration.

Long time readers of the site know that it’s been a long process for the project:  design reviews, planning department recommendations, and a turn before the city’s hearing examiner.   Today was the second to the last step, where the rezone had to make it out of Councilmember Sally Clark’s committee before going before the full council.

Among the topics of discussion were the changes in height from 40 to 65 feet, a reduction in parking from the standard of 95 spaces down to 74, and the level of neighborhood support for the project which was described as 20 in support vs. 5 against.

Councilmember Tim Burgess seemed especially supportive of the project, saying it was a “very good project for neighborhood.  I hope there’s more.”

Committee Chair Sally Clark remarked that “concerns about height are serious are are taken seriously. “

Councilmember Rasmussen declined to vote due to another appointment and a desire to read all of the project documentation and public comment first.

The next step is a vote before the full council, which could happen as soon as September 8th.  If approved there, the rezone is officially approved and the detailed permitting process will begin.   The developer has previously said that real construction would start in the spring or summer of 2009 if the rezone is approved this fall.

Here’s a link to the city’s video of the committee hearing:  http://www.seattlechannel.org/videos/video.asp?ID=2280825    (if you can get Real Player to do it, you’ll want to scroll forward to about the 1:15 mark for the rezone part of the agenda)