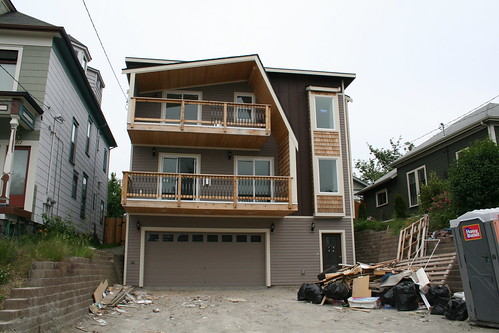 You can find one on just about every other block:  a huge, three story, four to five thousand square foot house plopped down next to much smaller, older, reasonably sized homes.   And as you may have seen in the PI yesterday, City Councilmember Richard Conlin is working with Sally Clark’s Land Use & Planning Committee to draft new regulations to control them.   The main focus is to restrict the size of houses based on the size of the lot, effectively giving a few more feet of open space on each side and in the backyard of the house.

I’ll be honest:  the size of the houses doesn’t bother me.  In fact, I think increased setbacks between property lines and houses is going in the direction of more suburbanization, which is the opposite of what we need in a growing city.  There’s no public benefit to an extra foot or two on either side of the property line or few hundred extra square feet of space in the backyard.  That’s not space that anyone can enjoy or do anything with.  The only benefit is a private one to the existing neighbors, letting in a bit more light, etc, but it’s not a game changing difference.

The main problem with these new houses is the way they relate to the street, and I don’t think that is usually a factor of their size.  If you take a new house and compare it to the older ones next to it, the biggest problem is the huge, street-facing, two-car garages that take up the entire first floor of the structure.  It creates an unfriendly environment for pedestrians and sets the livable portion of the house way up and apart from everyone at street level or standing at the front doors of neighboring houses.

The good news is that parking requirements are also under review with the city.  I spoke to Councilmember Sally Clark today, and she said that she is concerned about the way garages overwhelm the design of houses on small lots, saying that it often “looks like the house is designed around the car instead of the people”.   Here’s a couple of changes they’re looking at in her committee:

Councilmember Clark seemed least sure about that last requirement, saying she’s open to it but wants to listen to neighbors first.  I’m sure she’s anticipating the “but what about my street parking” argument that I’ve heard many of my friends make here in the CD.  But I would really question why we’re still requiring single family houses to be built around cars in an age where the cost of gas is skyrocketing and people are starting to drive less.   Not to mention the fact that most existing garages are used for storage, not parking.   Why not at least relax the requirement and let the market decide whether people want to pay for a garage (both in cost and unattractiveness) instead of forcing it on both the homeowner and their neighbors?

After all, most older houses in our neighborhoods don’t have garages, and we’ve always gotten along fine without them.  Why hold new houses in those same neighborhoods to a different standard?

0 thoughts on “Time to Slim Down Mega Houses and Mega Garages?”