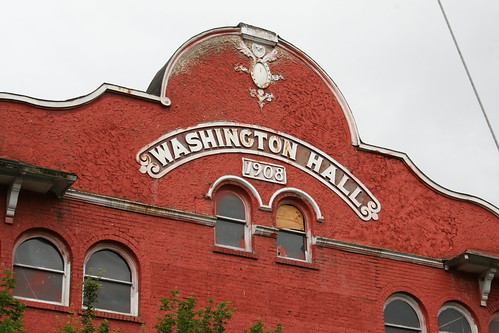 My busy morning kept me from immediately catching this bit of news in the Seattle Times:  Washington Hall is up for sale, and one of the interested buyers wants to put condos into it.

The current owners are the Sons Of Haiti, an African American order of the Masons, and they are tired of the maintenance hassles of dealing with such an old and needy building.

Charles Adams, a building manager and an officer with the Sons of Haiti, said the group, which purchased the building in 1973 for $50,000, hopes to sell it for $2 million to $2.5 million so it can buy a newer building in Renton for meetings and activities.

As far as the building’s history is concerned, no one knows more about it than Adams. Now 75, he was there when Brown, Hendrix and Cab Calloway played. The hall was often rented out for shows by the legendary black performers.

Historic Seattle is interested in buying and preserving the building for the community, but the asking price is steep when considering the potential cost of repairs that are needed on the structure.   The executive director of the Central District Forum for Arts & Ideas is interested in partnering with Historic Seattle, including helping with fundraising.

And while I’m generally a supporter of growth, density, and development, can’t we all agree that historic, culturally significant public spaces should be off-limits for conversion to condos?

0 thoughts on “Washington Hall For Sale – Condos Next?”