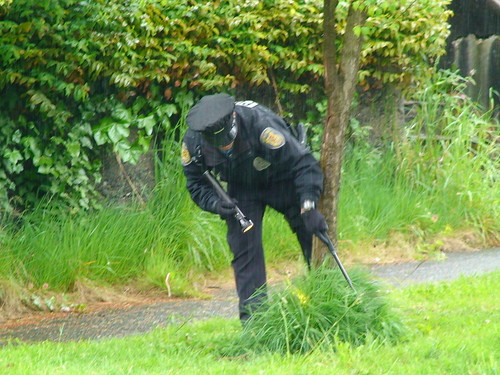 This morning at 10:45am a 911 call was received from a resident near 15th & Alder who heard five to six shots fired. They then looked outside and reported seeing a male running down the street with a gun.

There’s not very much confirmed information at this point. The original call was a bit chaotic, with multiple reports of victims/ suspects running in multiple directions. I just spoke to Mark Jamieson from SPD, who reported that there is no one in custody and no victims identitifed so far. Gang detectives are helping in the investigation, but it’s too early for police to definitively say this was gang related.

The only property damage is to the tail light of a truck that was parked near the intersection. Officers have recovered several shell casings from the scene.

One of the witnesses reported seeing the suspect with the gun get into a black Crown Victoria. An officer ended up behind a vehicle that matched both the description and license plate given by that witness, and eventually pulled the vehicle over near MLK & Mt. Baker Blvd. But as of right now police can’t confirm that the two occupants of that vehicle were involved or whether any weapons were found inside it.

Then later around noon there was a foot pursuit of a man in a red coat that matched one of the descriptions originally given out in the call. But he eluded police and was last seen running into Yesler Terrace.

It sounds like a major problem here the lack of cooperation from the possible victims and/or people that were in the area of the shooting. Three men were detained by police at 16th & Spruce shortly after the event, but they would only say that the shooter was wearing a red coat, and were described by police on the radio as uncooperative.

Now I’ve heard it’s deeply unfashionable in certain quarters to be seen as a snitch. But we’ve got some very dangerous people running around firing shots and no one involved is willing to help police take them off the street. So it’s only a matter of time until someone’s friend, kid, or family member is killed by that gun and the guy who’s wielding it. And that person’s blood is going to be on the hands of all the people who refused to help out when it was needed. 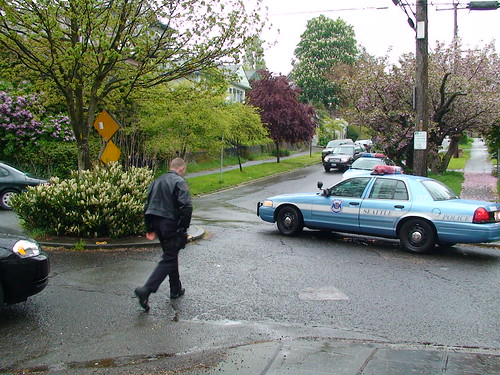 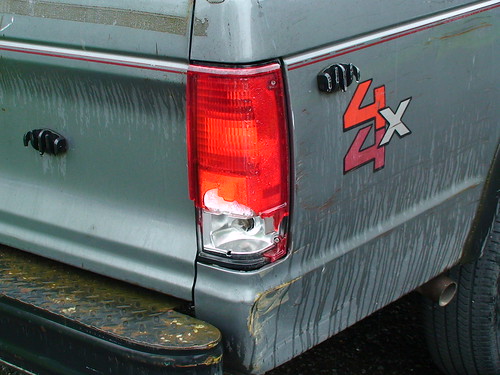